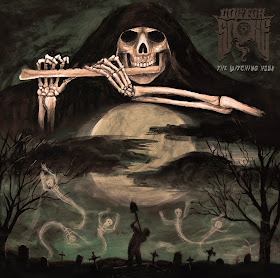 I've grown into this, you could say. When I took this gig, it was all sandy descriptors, Sabbath nods, riff worship, and clouds of smoke that should've gotten me evicted. The journey's been littered with thorns, the expanded consciousness clouded by genre tags and limitations I've placed upon myself. Fuck. Tonight my wife tried dissecting my anxiety. She's no mental health professional, but she's also no stranger to my perks. These limitations, these rules... they're all self-imposed. They're all also quite fucking meaningless. You may have noticed these Sundays are lately more than just sludge. Today's feature is a perfect example of why I can't limit myself.

When Heavy Planet featured Ohio's Doctor Smoke last October, we met a quartet of stoner occultists going thick on soiled riffs and channeling an inner Bobby Liebling. Just a year later, the band offers not only an expanded tracklist, but an overall improved approach to the craft. The Witching Hour's nine tracks (six of them entirely new) illustrate Doctor Smoke's stomp into their own skin, shedding their reliance on doomy fuzz and trusting themselves more as songwriters and musicians.

We know three of these tracks. And rather than serving to fluff the run-time, they actually create a broader scope when sidled next to the newer tracks. Relentless and baleful, The Willow kicks off the immediately punchy, rollicking backwoods descent. Blood and Whiskey is still a smoker, sweat-soaked and groove-smacked. And those rhythms still flirt with evil and never get old. When The Seeker pops through before the album's final push, it's of course slow, dirt-caked, and the album's rawest offering.

Most notable on the new tracks are the self-realized, perfectly-structured lyrics. Evil Man is mossy doom, swaying and split with chafed licks, ultimately exploding into revved groove and guitar-pissing in all directions. But the plunge of the slow, murky vocal veil traps every-Goddamn-thing beneath it. The Toll emerges from soggy earth to find a torrid clip, pacing unpredictably and matching the erratic lyrical accusations. The whole of the album's thorax is a trip through a thorny, overgrown pass. Choppy, jostled, and pushing ever-deeper, these spilt-swill snags hardly heel the quick-twisted, punchy cruises. Doctor Smoke now have a hook in your lip.

Where the band's amped proficiency is most notable, however, is on the closing tandem of This Final Hour and Permanent Night. The former boasts as a heavy-hearted trench throttle, rattling you back to clarity with tempo shifts and sweaty rock-n-roll. The track progressively expands under a rueful mood, gently wheeling the track into pensive plucks. And by the time Permanent Night's bleak subject combines with the collection's deepest, grainiest groove, you won't know which elemental showcase takes the blue ribbon. The licks are more than just a sidecar, the throwback is more than just creepy, and the balance is more than you could ever want.

And The Witching Hour as a whole is so much more than a steel-toed stride. Eerie, distant malaise has never had such a pull. These songs creep among a thick timber until rhythmic deviations introduce a gleeful, punch-drunk vertigo. Guitars, vocals, lyrics, those low rhythms... ALL have their moment of showboated flexing. But where posturing would murder lesser bands, Doctor Smoke manage to make one another sound better. Collectively, the sounds never stumble. We're not sure exactly what corner of the woods we'll end up in. More importantly, we don't care. Hit me with another, drag me where you will... "My masters, pull my strings."