New Band To Burn One To: Bagual 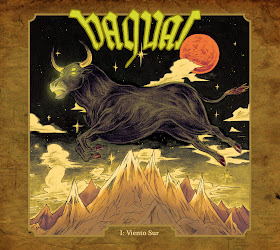 After listening to so many imitators, near misses, and heard-it-all-beforers, finally, FINALLY, this year has delivered some stoner worthy of the name. Hitting the desert scene with a mighty fresh slab of heavy fuzzy riffs comes Santiago’s finest: Bagual.

Having only formed in 2012, the Chileans have recently released their stomping debut record I: Viento Sur, layered with thick, heavy hooks of pure stoner heaven, all the while under pinned by a slight metal back drop.
Whether it’s the headbanging-dancability of a track such as ‘Matta’ or the frenetically pummelling riffs of opener ‘El ojo de Dios’, there is something on here for every Kyuss/Orange Goblin die hard out there, who isn’t afraid to face (perhaps) foreign vocals, and simply get lost in the power of the riffs.
Bagual are going to be a band to keep an eye out for in the near future, and a continued torch bearer for the ever increasingly impressive stoner scene emanating from South America.
(As a side note, just look at that artwork, It’s a four-eyed bull soaring over mountain tops, like a mythical god about to pound your face: an apt representation of Bagual it must be said)