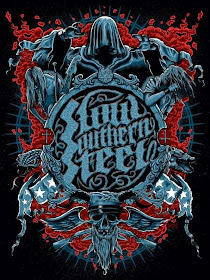 Half the bands I love stomp south of the Mason-Dixon line. For all the dribbling of these exhaustive Sunday Sludge posts, I've spent the last few years never succinctly outlining exactly WHY these sounds are distinctly Southern, likely due to geography's shortcomings. The grit and groove of Southern metal is unique, powerful, and impossible to stuff into a box of labels or expectations. Sure, Portland has its place. The Southwest is buzzing with anger and fuzz. Greece, Hungary, and Denmark have all bred incredible sludge acts tattooing the genre's landscape. But let's be fuckin' serious: Sludge metal owes everything to the American Southeast (Texas, we'll let you in, too).

Rwake's Chris Terry has (sort of) finally unveiled Slow Southern Steel, a documentary wholly devoted to a dissection of Southern metal. What sets apart Southern sludge metal? What influenced acts like EYEHATEGOD and Jucifer? And what's with the fuckin' flag of the Confederate States? You'd be surprised. Loaded with booze, beards, and an alarmingly warm dose of unmatched brotherhood, this documentary highlights an under-appreciated musical niche via candid interviews, blunt assertions, and no shortage of flattening live stage footage. If you weren't raised in the South, you won't sound like the South. And they'll know it.

Strong family ties, nostalgia, religion, and unending uphill battles are just a few of Slow Southern Steel's triumphant reveals. This "dirt circuit" survives on familial bonds and realistic expectations. Word o' mouth is more important than social media, and there's no shame in sharing a disco-based rebellion. Beautifully-realized gravel road imagery complements the sounds, the stories, and the impact of a scene so ripe with mutual respect and appreciation that it's damn-near overwhelming. This film perfectly explains the things I can't. I'm just a dude who loves Acid Bath. But this is a film that helps me understand why.

Pair with: Pabst Blue Ribbon tallboys, one after another