LP review: 'Welter Through The Ashes' by RODHA 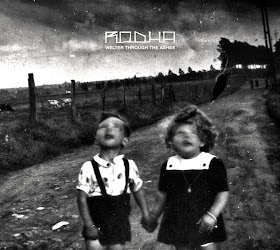 Two years ago a five track monolithic sludgy-doom masterpiece was released in the form of German group RODHA’s demo EP Raw, gathering a collective to gasp breath and say “Oh Holy Fuck!” as layer upon layer of devastating riffs and pounding mounds of destruction caved in to your skull in a glorious release of energy. Now, a larger collection of people get to stand up and roar from the depths of their guts as finally the band’s debut full-length has arrived, and it redefines the word OHMYGODTHISISSOFRICKINGHEAVYANDAWESOME.

Welter Through The Ashes may well soon be considered a game changer, an album where others spend their carers trying to capture just a hint of their stench, to muster even a fraction of the venomous power which extrudes through every orifice. The record opens with ‘Tresor’, six-and-a-half minutes of massive riffs and hell-spawned vocals, something many bands could only contemplate in their wet dreams, starting with quickened sludge before moulding into a doomier ending; it echoes the soul of what makes RODHA. With Mo Posch’s vocals sounding at their crushingly brutal best, you find yourself gripping your fist menacingly tight as he yells “What the fuck did you expect?” through the record’s face-melting title track.

If you make it further into the record without being completely crushed under the band’s devastation, there’s a sense of heavy beauty in the emotion to be found in tracks such as the empowerment and anger of ‘Overloaded’  (a slightly more polished version than the one found on Raw), and the charging desperation of ‘On Solid Grounds’, create layers to RODHA not found in too many other bands playing at such relentless aggression. RODHA create devastating powerful sounds and craft them into quite impressive moments a singular masterful songs whose essence don’t get lost in the mire, but rather guide it.

The record ends how their demo Raw began, with ‘Bliss’, a song about self-realisation and being fully content with who you are, not living the life of someone else, and it’s a crushingly powerful statement you can scream out as your fist pounds the air in rhythmic death-blows. RODHA have created a truly stunning debut record in Welter Through The Ashes, something which lives up to all of the promise and expectation met with their demo Raw (read what Seth thought about it in his Sunday Sludge). To every band reading this, RODHA have raised the bar, are you ready?