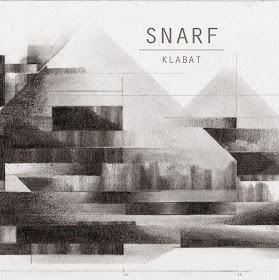 The hits just kept coming this week. Some would drum up the ridiculous superstition of death coming in threes, but a fourth hit a bit harder in my narrow, heavy corner of the human experience. Robin Williams caved to depression, Lauren Bacall's rough voice went silent, and the incredibly influential bad-ass that was Jay Adams suffered a quick halt to a fast life. Learning of a band you love hanging it up for good can be a fucking downer, but circumstances rarely match those of Swiss droners Snarf when it comes to sudden, unexpected loss.

Following the loss of their frontman Chris, Snarf have declared themselves to no longer exist. Their final, staggering dose of droning sludge was mixed and mastered just before tragedy struck, effectively rendering Klabat Snarf's swan song, a bittersweet adieu for a under-appreciated trio just hitting their stride. Here's one epic track swelling to thirty-three minutes, twisting and shape-shifting, leveling with hovered sustain despite brisk, bold, and busy delivery.

The sheer volume of emerging layers is numbing, leaving behind sterile static in favor of slugging riffs that meander and teeter. The whole of the track buzzes with eerie reverb, recalling the best droning moments of Snarf's previous triumphs. But the prevalence of nightmarish doom is a heavy-handed pronouncement of mastery. Innumerable slow-burning disturbances under tight drones evoke slight, distant spooks that leave listeners in cold shudder.

We could dissect the track into movements, but I simply don't have the vocabulary to do them justice. Scraped vocals bark with malevolence, entering a sonic cemetery and seamlessly transitioning toward deliberate, haunting chants. Klabat is at times wholly primitive, at others thoroughly disheartening. Snarf are patient, the dominant doom crunches are slow with agony, and the overall unpredictability marries unearthed stratum slabs to raise questions that the band, unfortunately, will never be able to answer.

This record hits so deep. On its own, the track smolders and frightens with incredible scope and character. The broad sweep of soundscapes and nightmarish curveballs set apart both this record and this band. To think this is the last Heavy Planet will hear from Snarf is a drag, sure. But the ardor and care exercised in the crafting of these sounds should be noted above any tragedy. Sit with this and allow Klabat's tides to direct your emotions. You'll get there.