Welcome to our first official post of "Heavy Planet's Reader Takeover". This is a post in which one of our readers submits some of their favorite band's in hopes that they can get a little more well-deserved attention. These next four band's come from John Fadden. John is the vocalist for one hell of a killer band out of Boston called Ichabod. If you have yet to to hear this band, do yourself a solid and check them out sometime. Now...on to John's picks. 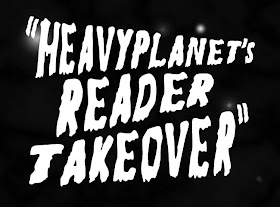 "Hey this is John from the band Ichabod. I'd like the readers to enjoy some of the amazing up and coming talent we have had the privilege of sharing stage time with leading up to the half-way point of 2014. Any song available by any of these bands is a guaranteed homerun."

2 words: Awe Inspiring.
Adam [bass/vocals] & Meghan [drums] have an undeniable chemistry and put on a live show that rivals any 5pc. dual gtr. riff fest on the planet. Adam's brooding stage presence compliments Meghan's bombastic and passionate drumming perfectly. Their songs are heavy on hooks, flawless execution, & fuzz. They are a lethal duo who I assume won't be a band that goes unrecognized nationally for very much longer.

Visually ominous & nothing short of a full-scale auditory assault SET brings together elements of 70's/80's occult rock, an at times not so subtle mixture of hardcore from all corners of the US [Boston, NY, LA, & DC]...well don't ask me how they do it so seamlessly, but they do...... and top it all off with a crusty/DIY style presentation which is unmistakably genuine. Not too mention that just like Bdrm Rehab Corp. this group is as friendly and personable off stage as they are a gang of denim vested, bearded warriors on it.

Side Effects May Include [S.E.M.I.]

This 4pc outfit from NH falls more into the experimental/progressive metal category than the rest of this playlist but they deliver their stony goods as well as anyone. Obvious comparisons to Faith No More/Mr. Bungle aside, these guys are as animated physically as they are musically. I'd suggest the track "Wakizashi"

Lastly, we have Massachusetts' own FOUR SPEED FURY. The band features original Ichabod vocalist and founding member Ken Mackay. The band formed in late 2013 and have already crafted a set of songs that are custom made for live performance and they surprised and delighted the audience last month as the opening act for Swedish riffmeister's Deville in Worcester, MA. alongside the before mentioned Bedroom Rehab Corporation and us[Ichabod]. Ken's unmistakable trademark vocals that brought Ichabod's multi-dimensional musical constructs one step beyond their own sonic event horizon have once again become realized and shine for all who listen. We cannot and could not be any happier for Ken and the rest of 4SF.

Learn how to place music on itunes at ReverbNation.com

Thanks John for the awesome bands! If you would like to takeover the pages of Heavy Planet for the day you can do so by going HERE.