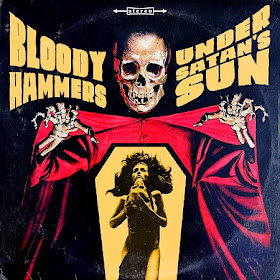 Bloody Hammers, those nefarious miscreants proudly hailing from Transylvania County, North Carolina are back with their latest and greatest monster mashup of gothic stoner doom. Under Satan's Sun is ten wicked tracks of dynamic diabolism and creepshow cool!

It all kicks off in sinister fashion with "The Town That Dreaded Sundown", replete with vintage spook clip and macabre scream before settling into a bludgeoning riff hammering away over a strident backbeat. "There's an evil that walks these moral grounds" croons Anders Manga in his deceptively mellifluous voice. Unlike most of their retro rockin' brethren, Bloody Hammers are not inclined to fill up every empty space in the music, allowing the songs to breathe and, as a consequence, become more cinematic presentations, like a modern day version of Alice Cooper (whose "Second Coming" is covered here in appropriately creepy crawly style). These cinematic atmospherics are quite evident on "Death Does Us Part", a gothicly romantic paean to lovers leaps, augmented by Devallia's understated keyboards.

"Spearfinger" amps up the horror show histrionics with a killer fuzzed out buzzsaw riff and a swelling shout along chorus. The guitar solo is of the terse and tasty geometric style a la Ace Frehley. The fuzzed out psychedelics continue on "The Moon Eyed People" with its sociopathically circular guitar riff and dirge-like cadence. Elsewhere the band adopts a punkish beat on "The Last Alarm", channeling a total Misfits vibe. The clearcut standout of the album however is the title track, which is both a demonic love song and a summer thumpfest that just begs to be blasted from the speakers with the windows down as Anders sings "Under Satan's sun and burning for you like a demon, let's make this memory sublime"!