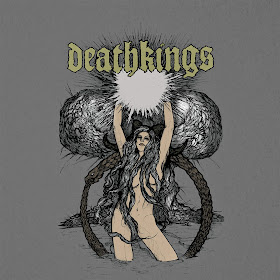 So this vinyl swing had to show up and fuckin' ruin everything, huh? Oh, multiple color schemes, bonus tracks, digital download coupons, limited releases, alternate artwork... I'm guilty of nodding into all this nerdy shit, but I'll never lose sight of the importance of actually immersing myself in the sounds spit from the grooves. Fuck the naysayers, but fuck the purists, too. And c'mon, Mastodon. Seventy clams for a "limited edition" LP?

When LA's ambient sludge-doom foursome Deathkings decided to press their 2011 Destroyer triptych to vinyl, they had to surgicalize it just a bit. That meant splitting the staggering, unsettling Martyrs into two tracks. Strangely, nothing's lost in the transition and both volumes swing with concrete fists. Vol. I proves bulkier, heaving lead repetitively and bloodying as much as it numbs. Sean Spindler's drums are absolutely assaulted, while scraping guitars pit listeners against a wall and stuff their mouths with stones.

The violence never relents and the whole of part one is loaded with abandoned hope. Promise is jarred loose and despite the rhythmic shift toward lifted sounds, we're prepared to re-descend. Vol. II serves an awesome drone hover peppered with drums and crushed by massive doom slabs. The reverberating static tightens to spew sludgy despair that's downright vile. The mud is given time to crust over just until cracks emerge.

The collective thirty minute bookends of Halo Of The Sun and the closing title track are swollen, fragmented journeys into dark, primitive reflection. The opener's despondent atmospheres deliver a collective melancholy that just won't fade, cascading with riffs and chugging toward seasoned, penetrative barks. Bleak static glazes the track, hanging and spreading enough to make us shudder. Slowly burning and sliding toward earthier elements, the progressions are unmoved by the choppy seas ahead. And soothing as they are, the merciful closing chants offer more dread than anything.

Heavy in both form and function is the closing title track, sounding as much like a funeral chant as a backwoods sacrifice. Buzzing through what seems like lifetimes is a boiling angst, spilling until the emergence of a cruel death-rattle. Echoed licks splinter into shards and the swinging doom pendulum marries the very real, sobering vocal. As the Earth scorches, the album delivers on its promises. Wider at each breath and thicker with every lurch, the sludge-doom carry-out is a brilliant, punchy final gasp.

Destroyer lays a low rumble that sits heavy in the chest, never quite making its way out of dense, nebulous cavern. Each of these three tracks is its own journey, none of them leading toward the sun. But cold reality has its place here, and the austere metering is drawn-out just enough to soften the sting. If the promised follow-up is another enduring slug to the back of the head, we welcome it in our swooning trance.