New Band To Burn One To: WARP RIDERS 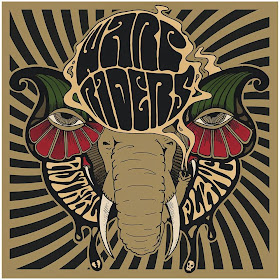 "As I was driving home from work today, I was listening to all of the over-commercialized and over-played bullshit that comes with listening to terrestrial/satellite radio wishing that I had queued up the playlist before putting the car into drive. I couldn't wait to get home to listen to something far less familiar, something that more people need to do when it comes to music, to get out of their comfort zone per say.
Today I was looking for something that was heavy and had an intense groove. I found that in Norwegian band Warp Riders. On their latest 4-song EP "Astral Plane", the band displays an over-abundance of weighed-down bluesy riffs and body trembling groove with a bit of psychedelia thrown in for good measure.
With an ear tilted towards the seventies, these four tracks are loaded with double-layered fuzz, free-flowing leads, and hard-driving bass lines. Passionate vocals and steadfast drumming round out this gratifying aural quickie.
Recently, the band was named one of the nation's most promising bands of "Pyro on P3 (National Radio), and has been on tour in Germany.
I look forward to hearing more from this band hopefully in the near future.
For now I'll just jump on board for a sensational ride."