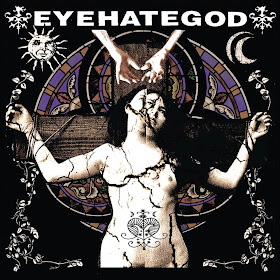 Two years ago, EYEHATEGOD frontman Mike IX Williams told me he and his band hated the term "sludge." Considering the band has spent two and a half decades pioneering the sound, he can call the shit whatever he wants. What's less ambiguous, however, is the NOLA-branded bootprint ExHxG have left behind during their tenure. The band's self-titled fifth album arrives at the end of a path strewn with bumps, potholes, and fallen bridges. Where lesser bands throw in their towels, EYEHATEGOD collect the fragments, lift their heads, and whiten their bloody knuckles.

The band's first full-length studio release since 2000's Confederacy of Ruined Lives fits snugly within their abrasive discography, offering eleven tracks of distortion, corrosion, and revolt. Long-promised and hotly anticipated, the album delivers to fans a perfect amalgam of tradition and progress. Longtime followers can rejoice that the destitute New Orleans torment hasn't slowed one hair, while anyone experiencing ExHxG for the first time can clear their calendar as they eagerly dissect the band's previous landmark efforts.

Phil Anselmo's production captures the band's truest sounds, navigating between screeches, shifted gears, and endless angst. From the onset of Agitation! Propaganda!, feedback is checkered amid thick, chewy riff-rolls and the late Joey LaCaze's drum flurries. The torrid clip re-emerges on Framed to the Wall, a potent blend of hopelessness and distemper. And when Medicine Noose guns its quick-rolling groove, the abrupt close is hardly noticeable with all the hot ash left in your mouth.

But the slower, swinging, stop-motion grind best signals the band's return. Thickening beneath Mike IX's scourge, Trying to Crack the Hard Dollar sways and grinds with sweaty, twisting coils. Robitussin and Rejection allows the guitars to hang with long sustain, chopping on some of the disc's thickest moments. The muddy grooves do seem to find bright moments of near-clarity, but the South is never more than a whisper away. When the riffs rise, the imminent plunge is that much greater for it. The varied viscosity, you realize, is hardly the point.

Distorted, snarled spoken-word broadcasts introduces Flags and Cities Bound, a seven-minute doom highlight. There's no end to the praise and colorful descriptors I could heap onto this track, one that drags us by our heels and slowly extols grief. Opening on a powerful oration, the columns supporting the song's frame are of the heaviest breed, but the descent under a sooty yellow sky can't hold a dim fucking candle to LaCaze's showcase at track's end. Un-fucking-real.

And I can't help it. That sludge label had to go somewhere. The fat, cumbersome The Age of Bootcamp stays low to the ground and marks the album's best evidence that ExHxG have lost zero steam with regard to either mission, energy, focus, or output. Stopping, starting, spiking at the mid-section, these final breaths grind out until an abrasive and jarring overstimulation in the closing minute. It's exhausting. Which reveals exactly what we'd been hoping: these guys still got it.

The EYEHATEGOD trademarks and trackmarks are all here. That's not the surprise, though. These sounds transcend the decades of abuse, both inflicted and received. They could have been laid to tape in 1988 and they'll still resonate decades from now. Call it a refreshing helping of cold truth or a self-inflicted road to warped relapse. Another in a storied, weathered history of blooze-metal NOLA cocktails, EYEHATEGOD find their mark and fucking nail it. 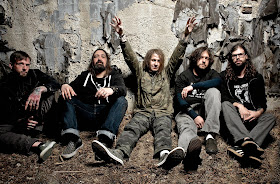 For fans of: You fuckin' kiddin'?
Pair with: In The Name Of Suffering Black India Pale Ale, Three Floyds Brewing