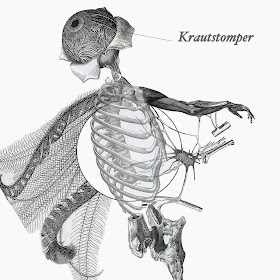 The next time Russell throws a birthday party for himself, I'd better pretend to be busy. Someone showed up with a handle of Johnnie Walker Black, and before my face hit the pillow I'd find myself with a broken thumb. Something doesn't taste right and the smell of sausage this morning is about to turn my stomach sour. Small steps, shallow breaths, and some smooth stoner sludge just might help me get outta this.

Berlin's Krautstomper paint as much with psychedelia as they do with churning tempos, but the amalgam of the weird, the heavy, and the silken is unique and refreshing. On their self-titled five-track EP, these... um... krauts whet your tripper with a broad arsenal of influence and approach. Each track carves its own steady swell to shape a sound that caters to numerous pegs that can't be stuffed into drilled cavities.

The viscous sludge of Wand opens the release on a misleading assumption that the band is falling in line with chugging basslines and jagged guitar barbs. The track is introductory and brief, warming your senses just enough to dull them for what lies ahead. The punchy, multi-faceted Oranje is littered with pensive passages and guitars spray with surprising focus. If TooL ditched the art rock posing, they may have warbled along like this.

Fret-noodling appears front and center on the quick-paced Embankment. Slippery and fleeting, these instrumentations escalate and dive repeatedly with patches of echoing buzz, a delicious duality that serves as primer for the EP's closing tandem. Spanning thirteen minutes with Herman and Potaten, stoner grooves and cryptic samples complement the light dusting of spacey Jeff Buckley guitar whispers. Herman lounges and sprawls, allowing laziness before progressively boning out. Potaten, on the other hand, enters sullen and somber, panning distantly with a subtle hint of Primus. The rhythm lifts and before this instrumental journey concludes, we're welcomed by pugilists' grinding meters to balance the ethereal themes.

Eclectic and divergent, this release stands out from routine Sunday Sludge offerings in its departures. Krautstomper may be relatively cherubic, but their delivery of rhythm and melody is given highest praise, that being considered unable to categorize. If you want your Sundays easy, this EP may be your cure-all. There's enough chug to rev your recovery, but Krautstomper tug the reigns just enough to steady your shakes. And when the bed stops spinning, give this one a second rotation.