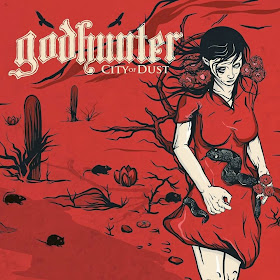 I visited Tucson four years ago. It was a quick weekend trip to see friends, a trip that included stops at Starbucks and In-N-Out Burger, jaunts to Wasson Peak's trails and Tubac's historic buildings, and a now-evident naivete about what the city's truly like. I knew nothing of the area's water supply issues, the state's correctional system's "Death Yards," or the dusty malaise regularly experienced by no small number of Tucson's own.

On 2011's Wolves, Tucson's Godhunter attacked humanity, specifically humanity's (lack of) presence in society while chiding automatons for accepting all they're fed. With the release of City of Dust, the stoner-sludge quintet's attack is more balanced, more focused, and more specific. What results is a fully-realized conceptual lament on the state of their surroundings, spreading angst and exposing truths across eight tracks that progressively pick up steam and release the hounds. These dudes are pissed.

Godhunter waste no time outlining the relationship they share with their city, as Charlie Touseull barks with weathered assurance of "that duality that defines me." The doom cadence and stoner-sludge groove are, by now, part of Godhunter's foundations. But the deepening march lunges and the shifts in pacing offer consistent abrasion, rivaled by sticky guitar explorations at track's end. As complexities reveal themselves amid the lumbering doom of Rats in the Walls, listeners will begin to see where Godhunter are taking us. Rhythms may lift, but our knuckles will continue to drag as we're consistently subjected to slow, solid slugs.

As these tracks progress, so does the descent into shells of ourselves. The darkness revealed on Snake Oil Dealer is exploited, buzzing with bleak realizations and breaking down to ring your ears. Godhunter effectively inject strong press clips, particularly here with a sheriff sharing thoughts on the attack of Gabrielle Giffords. And I honestly can't say whether the crackling fire and coyote howls put me at peace or will keep me awake tonight. Shooting Down the Sun follows as an acoustic reprieve, clubbing with emotion and stinging loss to juxtapose itself from the balance of these songs. The dual vocal is a somber spar "singing songs of hope, cringing from despair." This tandem is lonely and powerful.

Godhunter return to the stoner-sludge trenches on Palace of Thorn, peppering veiled vocals within the pressing low-end valleys of repetition. When the brakes hit, it's as if we're approaching a roadside wreck. The track scrapes toward warping psychedelic spirals, grinding directly into the title track. With the album's truest exercise of sludge, the band slam both Tucson and the whole of Arizona, questioning leadership and promising revolt. If the album's vitriol has a marquee track, this is it. "Home is where the heart is, hell is where the home is." Jesus, these fellas get straight to the fucking point. Though effective on its own, the song is an enticement toward the closing triptych's final chapter, Plague Widow. An ominous, creeping death permeates until spite and malice crash through the black party. The clouds simply never clear, hanging with a sticky, churning tempo that swells and heaves. An icy tinsel is strewn about, but the growing, unified chant sends an ultimate script of futile non-acceptance.

It's clear peace and happiness are Godhunter's white whale. The only option left is to embrace the flames and burn with the priest. Tales this morose and despondent need the occasional chaotic implosion, and Godhunter smear a canvas with ugly truth. These eight tracks won't warm your bones. But more importantly, they'll crack open your crusty, sunken eyes. Throw in gigantic riff timber and hickory-smoked rhythmic filth and we're hearing one of 2014's best albums. City of Dust is a structured and informed refusal of acceptance. In the sludge style, we rarely get this much substance.