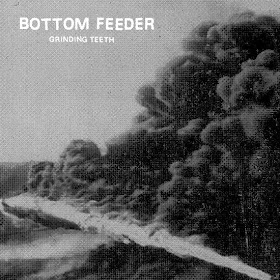 You can believe all you want there's a life to everything. Argue with the tautology that one thing leads to another and the symbiosis is free of time restraints. There's no life without soil, there is no soil without life, right? Stop it. There's no soil without death. It's a caustic and callous perspective, but if nothing died we'd run out of space to live. So simplistic, I know. But death becomes soil and soil nourishes crops and crops are dealt all over the world to feed just about everything.

But you don't wanna hear about death. You wanna hear about soccer games and good times with old friends and you want social media to scatter that fuckin' fake bullshit to all your fish-eatin' followers so your life can seem less awful than theirs. Come on. We're exhausted with all of it, and so is Copenhagen's Bottom Feeder. Their 2013 LP Grinding Teeth missed my queue, and finally screening the album in winter's worst months is my just desserts. If there IS a life to everything, then Bottom Feeder offer reminders of death, loss, and scattered thoughts.

From the onset of Void's cryptic politicking and repellent screeches, listeners will struggle to balance the abrasive and the numbing. Sunday Sludge hasn't offered anything this vile in ages, as agonizingly sharp and piercing licks counter sanded flesh. Seven staggering ticks both stick and sway beneath the veil of a Randy Blythe vocal, both viscous and torturous, swaying and hanging like limbs stuck to severed tendons.

On Life Support offers sick groove behind abrasive feedback, but we're given no reason to dance. The track showcases a duality that makes this album so compelling. It's frightening to realize you're not allowed to feel good. A punctuated, pervasive stop-start dynamic is all-encompassing in its negativity, but the marriage of punk meters and locomotive thickness is a lacing that ignores traditional structures. A lead-in to the title track smooths a wavering of black-molasses doom spreading over slabs of cold-stone sludge. Grinding Teeth's most vile track is also its most true, offering swaying hatred and a staggering spew of vitriol to anyone who'll listen.

The revved sludge of Tension drags us through frozen fields littered with broken stalks. There's no end to the abrasion, and while guitars offer the promise of escape, it's those filthy tempos that pin your shoulders. The back-and-forth is as dizzying as the repeated strikes, but you'll ultimately return to your knees in an indentured servitude. The echoed haunt of Dehydration is intermissionary in its unsettling showcase of a slow, dark embrace. If you can, simply give in to the extraction of hope. At least for a few moments until we meet the cringe-worthy Trusted By Few. The pendulum of lament has swung straight south, while pairing grinds and screeches is a punky-paced fist-fuck of motor-breathed tempos. Believe it or not, it's as in-your-face as anything else on the album.

If you've read this, you're likely the sort of fuck-up who could embrace Grinding Teeth's all-encompassing negativity. Do you really wanna feel better about things? Sometimes there's comfort in darkness, perhaps because it's real and un-glossed. If the sweet ain't so sweet without the sour, then Bottom Feeder have the world pretty-well figured out. These six tracks are jaded, sharp, and painful. When you think about it, it sounds like your marriage. Your commute. Your meetings with your boss. Maybe Bottom Feeder know you better than you know yourself. Sad, huh?