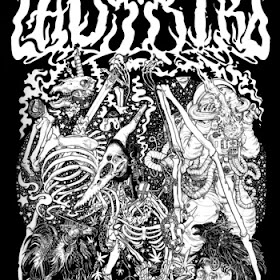 Better late than never? The landlord won't let you get away with that shit, man. He also can't stand all the complaining from your neighbors upstairs. The knocks couldn't disrupt your weed coma, he can't collect, and the fuzz from below ain't exactly keepin' Bruce's feet warm. I spent a bit too much time livin' the high life and now it's just me and a few dusty records sorting out ends and pieces.

2013 is gone, but look what just fell outta my pocket. Phoenix trio Ladybird released a pair of puffed-out albums that display their range and their hazy focus. It took damn near a half-year, but I was... uh, busy. Offering spacey psych on Spliff & Wesson and hillbilly doom on Tombstoned, Ladybird may be the most prolific riff-wringing band you haven't heard. I hope you brought snacks; ah, Saladitos! Perfecto.

I wasn't sure where to start, and it probably doesn't matter. Spliff & Wesson is the tandem's cosmic haze, echoing with pans and warbles for twenty-four minutes of long drags. Numbness creeps in and your ears are gonna itch from the collected fuzz, progressively lumbering upward and outward. The growl revealed between shrill, spiking stalagmite licks rips with malevolence, so when you flip the cassette to Nossew & Ffilps, you'd better make sure the balance of your buzz doesn't rest on paranoia. Yes, you knew this would happen. Ladybird eliminated the dirty work for us and flipped their psychedelic stoner-doom square on its ass. And it's awesome. 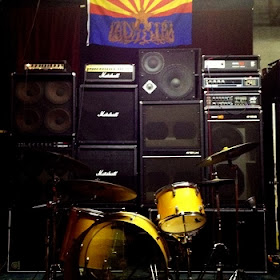 When you're ready to come down, have a seat with Tombstoned's Intro, a bayou-plucked reprieve that's wholly misleading. Five and a half clicks is hardly enough time to clean up, but it's reflective, soothing, and clear by comparison. Weedy doom rolls in on Papers, crashing through your trailer wall like a jilted lover after uncovering the truth. The drone tapestry shakes with every interruptive riff, and Ladybird strike hard and often. Repetitive, reverberative riffage introduces the crushing No Reason, a blow after blow punishment for the glutton. There's even an astral nod to S&W, glowing through bed sheet window treatments until the furry beast returns. Ending your trip with the twenty-two minute Marble Orchard may be the best or worst decision you'll make today. Doom landmines are promised at every step, so steady your stare and tread lightly.

You're gonna have fun with these releases. You'll discover occasional parallels, and Ladybird's divergent paths hardly pose a red pill/blue pill dilemma. Shit, take 'em both. Just know your limits and don't test them. If you've got the time, you'll have fun tackling both Spliff & Wesson and Tombstoned on a Sunday drive. And if you've lost your steam, put Ladybird's leftovers in the fridge and enjoy them tomorrow. Heavy Planet honors and showcases stoner rock, doom metal, sludge metal, and psychedelia. Sounds like Ladybird fucking nailed it!