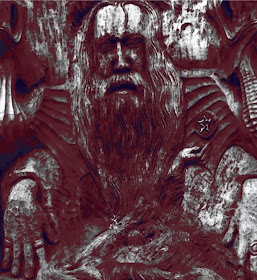 Though few and far between, I love opportunities (or duties, more appropriately) when I can pull away from a computer for a crisp breath and a skyward glance. My escape from forty weekly hours of glazed repetition is generally reserved for a morning stomp with the next Kylesa or a cleansing of the wicked via DVR catch-up with my wife. Now and then, these Sundays extend a crusty hand that yanks me toward gigantic, primitive buzz. I can't say it puts me in touch with the Earth or throws back my head with an outstretched tongue, but it certainly doesn't feel like these sounds result from digital files, compressed and re-configured through fabricated forums.

Bands bringing the medieval run the risk of tucking cheese into their pockets on their way to summer camp. But straight off the Judas Cradle by way of South Wales comes Haast's Eagled, an experimental, atmospheric sludge-doom act that limits comparisons and expands consciousness. The whole of their four-song self-titled debut EP stones and impales as much as it soothes and swirls. Stoner sensibilities wisp between pummeling sludge pendulums as death's snow taps at fresh graves, with gravity licking the heels of every note.

Setting off Viking is a somber softness, whispering a drone that breaks under electric doom riffs, stretching out to meet a bowel-dug vocal. The break into devastating stoner feedback is countered by classic-rock, Chris Cornell-esque lungs, creating an overall dynamic that's so seldom this successful. The slow stoner groove outlasts all other elements, encompassing listeners through powerful progressions and slow-motion sternum thumps. A trail of gold-flaked licks brightens a sooty sky as this introduction rolls like matted red carpet.

More reflective and somehow more primitive is the cavernous and somber pick of The Eye of God, a a reprieve only lasting until the stoner-doom again emerges and Norse, riff-laden passages unfold to absolutely crush. With a vocal that echoes Ronnie Van Zant on Simple Man, the midpoint is sullen until otherworldly black pit embers set off a slow spiral of flurried madness. So the deep South's influence has made one hell of a trip, seemingly reaching back to a time when only candles broke the darkness.

An intermission by comparison, Tracking the Footsteps of Goliath slowly drones, peeking through shaky samples and ominous cymbals. Oh, but that sludge dominates and smears the landscape, flattening and churning as if to introduce Cruithne Tide, the twelve-minute crusher that closes this all-too-short EP. The track as a whole is cool and melodic, but the loose echoes convey a sad, hollow cave trickle. As fire begins to rain and fiefdom villages collapse, the first track is bookended and the cycle appears complete. Drums join hands with warbled guitar whispers for a cold stroll through the ruins, slowly and deliberately lifting pace without a hint of rattle. Atmospheres, peeling layers, realignment, solos, hesher nods, drone cameos, and sludge cruises... I'd rather this never ended.

So is it lament or nostalgia? I know, it goes much deeper than that. But when I can't pinpoint exactly how I'm being taken to a time and place where I've never been, it's difficult to explain myself. Haast's Eagled weave a tapestry of sound that's as complete and comforting as any I've heard this year. Birth, school, work, death. This release mortars the cracks of life's cruel structure, providing a true sludge-doom escape that lays a breadcrumb trail while you lose yourself. Good thing, too. I'd love to talk about these guys again.