2013 has been a major year for new releases and the accompanying anticipation of many of them. There has been a noticeable number of known, favorite bands bestowing upon their admirers new fuzz fodder on which to chomp and chew, and it has been glorious. In addition, there has been a significant amount of 4 star albums seemingly coming out of the blue,  from previously unknown, as yet to be discovered sources, and it, too, has been phenomenal.  I am having the rock and roll time of my life, an experience I'm sure I share with fuzzheads the world over. I think back to the wild oats period of my life in which purchasing an album that had 2 or 3 quality songs from a total of 8 or 9 made it a worthy investment. A record that might have all its tracks of high sonic quality was quite rare. The underground world of fuzz and furor we presently inhabit provides us with a different experience. I marvel at the current state of fuzz/doom/psych/retro rock in which bands are releasing albums filled entirely with superior quality jams (Hey!, if I'm going back to my wild oats, I'm using this archaic term), and that's the case whether established artists are releasing their 4th, 5th, 6th album or up and comers are releasing debut or follow up albums.  Today we showcase one band that gained notoriety with their debut album and have recently released their much anticipated follow up, and we showcase another band that is releasing its second album as well, but perhaps with a lot less notoriety and expectation. Listen for yourself and let me know what you think, as I certainly and inevitably let you know my thoughts below. Ladies and Gentlemen, Summoner and Lint.
~~~~~~~~~~~~~~~~~~~~~~~~~~~~~~~~~~ 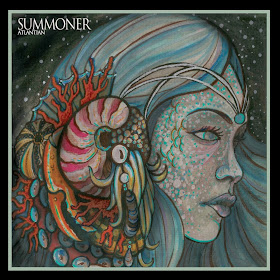 Early 2012 saw the release of an album that became one of the most sought after of the year, as newly named Stoner band Summoner, previously playing under the moniker Riff Cannon, released the surprising and stunning "Phoenix", an album of significant accomplishment in all its phases. This Boston foursome managed to accomplish something not many bands can match by delivering a veritable treasure trove of Stoner wonderment. Now with the follow on album, "Atlantian", members Chris Johnson (bass/vocals), AJ Peters (guitar), Joe Richner (guitar), and Scott Smith (drums) manage to once again accomplish the exceptional in their approach to melodic mayhem, effortlessly gliding through the metalsphere propelled by energetic tracks bursting with gleaming, polished psych-edged licks of ingenuity, tightly interwining anabolic, raw-boned riffs, and diesel powered rock thunder. These guys have stepped up their heavy game and it shows. This is the kind of album that slowly burrows its way through your subconscious, growing in appreciation with each light fantastic trip through its interstellar experiences. Summoner have established a signature sound through the release of these first two albums, and have demonstrated a willingness to put forth maximum and meticulous effort in mastering the melodies chosen for each song in the tracklist. Heaviness in bass and drums is matched perfectly with deep, fuzzy riffs, blended with clean, colorful psychedelic interludes, and married well with ethereal, haunting vocals, creating a sound that's at once familiar in style, but fresh in its respective presentation.

There is no weakness of melody on the album, as it delivers solid, enjoyable music from stem to stern. Favorite tracks include the opener "Gatekeeper", a paragon of Stoner music "Horns of War", and the measured, powerful "Under the Crystalline Sky". But all tracks on "Atlantian" are superb. 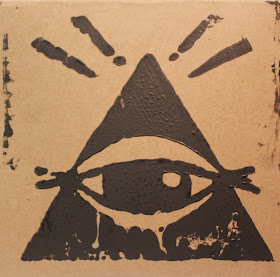 Hailing from Wollongong, New South Wales in the land of  Oz come the threesome Lint, a band who know how to throw down elegant, ferocious licks around finely crafted melodies that seamlessly flow in steady state fuzz, imparting a trance like experience to those willing to partake of the 7 conscious bending tracks of their second release, "Existence". Their music seems to borrow themes and snippets of sound and style from many rock subgenres, but never dwell long enough on any one to detract from the album's fresh, dynamic sound, which develops and coalesces into a vibrant, vibrating, voyage of acute indulgence and deep musical gratification.

The threesome of Brad on vocals and guitar, CJ on vocals and bass, and Dave on drums claim influences from genres as varied as grunge, sludge, and psychedelica, and while they don't name Colour Haze as a direct influence I would say they are perhaps unintended disciples of the German juggernaut. The music is moody, damp, cloying, and as mentally invasive as a Centaurian slug released by Khan Noonian Singh. Once it's in, it's there to wreak some havoc, scramble some brain wave patterns and infuse deep, dark, delusional designs of rhythm and pleasure. The songs are predominantly instrumental, but the vocals are well placed within the well written and expertly executed melodies of booming riffs, power thumping bass, and deadly drumwork.

Favorite songs are the melancholy mad dash of "Red Static" and the psychedelic power surge of "The Follower", but, just as it's Atomic Split predecessor, it's an album filled entirely of white hot tunes.