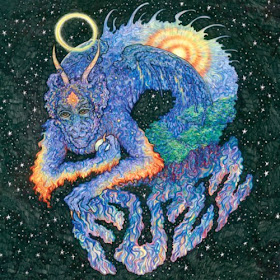 It's been a long couple weeks of playing catch-up with school work and prepping for exams. Luckily, I've been able to spend a lot of time getting familiar with some of this years awesome releases, albeit from behind a textbook. I've also been squandering a lot of potential study nights at local metal shows, but that's about what I expect from myself. Bluesy riffs also happen to be my favorite subject, and arguably the most important one. One of the bluesier releases I've been spending an exceptional amount of time enjoying is San Francisco psych-rockers Fuzz self titled debut.

True to it's name, Fuzz is laden with furry guitars and fat, numbing bass lines. While the album is particularly striking on the first spin, it certainly leaves a lot to be discovered for future listens as well. Drummer and vocalist Ty Segall is no stranger to the genre, and has made his high-pitched, punky vocals a trademark of many solo tracks and albums. On Fuzz, Segall's vocals combined with heavy psychedelic grooves are reminiscent of Tweak Bird and, at points, Les Claypool. Some tracks on the other hand, play up the trio's punky, proto-metal vibe and are easy to compare to retro rock legends like Iggy Pop or MC5.

Album opener “Earthen Gate” leads you very gently into the frantic, nasally "Sleigh Ride” which reflects the mood of most of the album. “What's In My Head?” may be the most interesting song on the album. Slow, thumpy and harmonic verses give way to a giant, crunchy and aesthetically poppy chorus. The track is extremely raw and spacious sounding; never leaving you with the emptiness of overly-clean guitars or doctored drum tracks. The album as a whole is very punchy and natural, which is really something to be desired when listening to a good psych-rock album.

From "Hazemaze" on, Fuzz power through the rest of the album; marrying familiarly sludgy riffs with a feel that's all their own. Fuzz is, put simply, Rock n' Roll done right. The 8-track LP never has a dull moment and stays consistently catchy throughout. The record has a certain sentimental feel as well. I'm sure that in years to come, I'll find the unmarked copy I burned for the car stashed away somewhere and pop it in. I can only hope that all this shitty exam week stress doesn't come flooding back to me.