Sunday Sludge: In The Company Of Serpents - "Of The Flock" 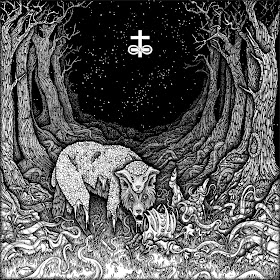 My wife finally admits that she's heard the footsteps. The footsteps I've heard for years. The footsteps calling into question my sanity, making me sound foolish after a few drinks over open conversation. Let's not chew on the disembodied laughter of children who aren't there or that weird chill that never stays in one place. Right now, let's just put to rest my doubts and acknowledge that there's something here. But maybe we're all fucking crazy.

Trust your instincts? Trust perception? Neither tend to work in my favor. And expectations have never panned out, so walking blindly and avoiding disappointment serves as success. When Denver's In the Company of Serpents debuted on Heavy Planet in 2012, my response was swift and staggered. Pools of fuzz found a grooving doom on their self-titled, setting up camp in the folds of my brain and stoking my swollen heart.

I was branded. The sludge-doom duo cemented their hammy fists among 2012's favorites and a follow-up was promised. But when expectations rose, I had to smother them with a bloodied towel. I couldn't let these dudes burn me like so many others had. By the time the band's sophomore release hit my ears, there was no template and no trail of breadcrumbs. I don't have to compare Of The Flock to their debut and there's no tale of the tape as it laces up against the year's best. But let's pretend I walked in with a crow on my shoulder. These five tracks would melt any expectation and set a new standard. This is a huge step forward from a band already carving their own element.

For all the riffing sludge-doom they deliver, In the Company of Serpents here adopt a more balanced approach by stretching extremes and snagging our black denim on rusty barbs. Immediately evident on four of these five tracks is an acoustic pluck, a swampy smoothness bookending the album with the introductory Ash Swamp and the closing tandem of Untied/Culling Essence from the Void. The lonely pop and hiss of rolling static on the opener sounds like a simpler time, while Untied's cool tiptoe is far more ominous and unsettling.

To say the crash was imminent is celebrating the obvious, but Craven's abrupt lashing singes like a grease fire before peeling back layers of plug and plod. Downtuned sludge swirls with heady fuzz, steadily clubbing bystanders with slow-motion snarls. Listeners are pressed into tight corners, enveloped by this heaving, riff-caked beast. When Blood from Stone gazes into unfolding doom, answers are dismissed and more questions are revealed. Riffs and Myer's thumps work in unison for a soggy sweep of the senses, but the buzz you felt is growing to a sting. Grant Netzorg's bellow has deepened and broadened it's target, while the band's aim has steadied through patience. Exploding into a steady patch of surprise, the track surges, spitting hot ash and rising only to repeatedly plunge downward.

The disc's title track finds the band's pinnacle, peppering dense riffs and summoning a smoke cloud with repeated, passioned stomps. Evolving from southern resonance into booming sludge, you'd expect (there's that word again) the trudge to hit the dirt. You'll lose direction when the burnt-finger licks separate themselves to flare rather than flatten. It's not all bone-shaking, chest-caving galumph. In every sense, this track (and the album as a whole), abandons the predecessor while managing to build on its foundations.

The moody, mournful stew of hard hits on Untied/Culling Essence from the Void is mired in stoner repetition. Avalanches of sound drop from every mountaintop, and the groove results more from controlled command than any buoyant optimism. No jaw is spared by the full scope of devastation, and In the Company of Serpents lace thick tones with endlessly proficient songcraft.

Whatever crafted these sounds, whatever's behind the curtain is hardly important. Interpret these songs from any angle and you'll find one of 2013's heaviest hitters. Of The Flock breathes with confidence, calmly composing itself between lumbering bricks of sludge. The transitions and departures are smoother than they have any right to be, and the separation from their predecessors and contemporaries has never been more evident. Among countless cloned sheep, this wolf is simply too exceptional to blend in.