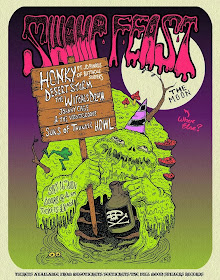 Last Saturday saw the return to Cardiff, Wales, UK, for those big bearded, tattoo caked, Texas fried and whiskey soaked, hard rocking gentledudes known as Honky as part of their short UK tour popularly demanded by those that were lucky enough to catch them the first time around on their very successful tour here several months ago in support of their latest album, 421.

Featuring legendary Butthole Surfers bassist JD Pinkus fresh from a stint playing and touring around the U.S. for The Melvins, and Honky guitarist Bobby Ed Landgraf recently standing in for Down guitarist Kirk Windstein following his departure from the band; Honky's return to the UK has been hotly anticipated since its announcement and I was lucky enough to be tasked with reviewing their stop at the Swamp Feast show at Cardiff's Full Moon Club, and my-oh-my what a show it was.

Swamp Feast kicked off early with   local boys Howl taking to the stage just after 5pm and a sizeable crowd had already gathered to hear what this 3 piece had to offer. Howl proceeded to rip through an energetic set of some very entertaining rock and rollin' blues that got the rapidly gathering crowd whipped up into a suitable frenzy. These 3 young lads showed they really have their shit together and despite their fairly recent formation, they played like they've been around for years and have played countless gigs. By the end of their set there were smiles all around from band and audience alike as the guys from Howl had a lot of fun on stage which provided some great energy so early on for Swamp Feast.

A short break and next up were fellow South Walian boyos Suns of Thunder and I was especially excited to see this band as I haven't heard or seen them for many years. Suns of Thunder are true stalwarts of the Welsh heavy music scene having been together since 1999. After their hiatus I am pleased to see this band back together at last and playing shows again and they didn't disappoint in the slightest. By the time they kicked in with their first song the venue was getting pretty packed out as I wasn't the only one who was excited to see Suns of Thunder play the Welsh capital once again. Suns of Thunder tore through a tight and fat set of heavy blues rock full of head nodding grooves and funked up riffs. With beards and long hair blowing in the Full Moon breeze, Suns of Thunder took the initial frenzy whipped up by Howl and turned the crowd into a full blown ravenous frenzy of already inebriated heavy rock worshiping wild-folk. When Suns had finished their set it was obvious to all that Swamp Feast was gearing up to turn into absolute carnage with the hungry crowd baying for more greasy heavy blues and groovy riffs.

We didn't have long to wait before another local band that have been around for years stepped up and proceeded to whip the already frenzied crowd into a rock and booze fueled mega frenzy. Johnny Cage & The Voodoogroove are a very popular band in the Welsh capital and elsewhere besides, and they always draw a crowd of adoring fans and never fail to convert new ones whenever they play a show. Johnny Cage know how to get a crowd moving their asses to their brand of down and dirty rock'n'roll and sleazy blues and with each band member adorned in fittingly dapper attire, Johnny Cage blasted through a highly enjoyable set that was fast paced and lively and which reminded me at times of Reverend Horton Heat or The Jim Jones Revue. The now tightly packed crowd were getting rowdy and the Full Moon was getting steamy by the end of Johnny Cage's set, with shirts being unbuttoned and moisture covered people everywhere having been further whipped into near hysteria by the blues rocking grooves supplied by the very talented musicians that make up Johnny Cage & The Voodoogroove

The night was only half way through but the party was in full swinging mode when it was time for another local band and one that is a firm favorite of many of the reviewers here on Heavy Planet; The Witches Drum. I've seen this band several times over the past couple of years but their performance last Saturday was one of the very best I've ever seen and will no doubt go down in the Annals of Welsh legend in years to come. Every song they played was brand new and which are due for recording and release sometime in the opening months of 2014 and if their performance of these new songs last Saturday is anything to go by, their new album is going to be a work of brilliance and I can't wait to hear it.

Their new material is much heavier than their last output and at times gave nods to the work of Kyuss, especially "Welcome To Sky Valley" which left me with a huge grin on my face. The similarities to Kyuss were only fleeting however as for the most part The Witches Drum delivered their songs in their truly unique and freaked out, acid drenched and psychedelic way. Singer Matt Fry, in his obligatory bright yellow marigolds and glittered face paint, was on great form with chaotic stage antics that saw him, and at one point one of The Witches Drum axe-men, jump into the thick and churning crowd to be lifted above everyone's heads or to writhe around on the floor in a wild frenzy of pure unadulterated freaking rock-outs. The unholy pentagram that is The Witches Drum ended their set in an evocation of otherworldly psychedelia creating wild eyed stares of bewilderment in all who were present, followed by an uproar of deafening noise from the exalted crowd. Beautiful fucking chaos is how I will always remember this performance from The Witches Drum.

By the time Desert Storm took to the stage The Full Moon was crammed to the hilt with hungry riff worshipers eager to hear what these Oxford stoner metal dons had to offer the venue once again. Desert Storm accompanied Honky during their previous tour of the UK as their official support band and when they swung by The Full Moon back then I was blown away by their music and a week later I feverishly went about reviewing their brilliant album "Horizontal Life", which they so kindly gave me to review.


The Full Moon was now a sweltering mass of writhing bodies while Desert Storm pulverized and crushed us all with huge stoner metal and sludge riffs played with massive amounts of raw energy that caused the crowd to surge backwards and forwards and all away around the dance floor to the point that I was convinced there would be casualties. Young ladies were being tossed about like bowling pins but thankfully no one was hurt and no one lost their smiles as Desert Storm stormed through delicious sludge, tripped out psychedelia and heavy and head down and nodding grooves to satisfy and somehow tame a crowd that was near to bursting into insanity. I thoroughly enjoyed Desert Storm's set and I can't wait to hear them when they swing by The Full Moon again in early December.

With blood shot eyes, mussed up hair, disheveled clothes and drunken slurrings, the crowd gathered for Swamp Feast headliners Honky who came all the way from Austin, Texas to grace our cold and damp city and to play to us their championship superboogie, hard rocking, hoedown party tunes once again. I managed to have a chat with JD Pinkus before the show and he was a truly standup and thoroughly decent Texan gentleman. Now, I am a HUGE fan of Butthole Surfers so I met one of my heroes that night but I managed to keep my cool and not act like some weirdo fanboy by just nodding and smiling politely as I tried to gauge what he was saying to me through his thick Texan accent and even thicker beard.

After a short sound check to get them sounding just how they wanted (Honky are ever the professionals), they kicked off with hilarious stage banter to amp up the crowd and then launched into a racous set of hard and heavy rock played so tightly and with such a relaxed manner that showed Honky are brilliant musicians and have a lot of fun playing their instruments. Honky easily kept the party going as they rocked The Full Moon to its very foundations with everyone dancing like crazy whilst caught in Honky's hard rock net, making them the masters of Texan Rock 'n' Roll. At one point Bobby Ed stepped aside to let one of Desert Storm's guitarists bash out a Honky song which went down an absolute storm with everyone cheering and smiling and dancing along. Honky ended their set to uproars of loud cheers and calls for more but Honky were done rocking us and so no encore was given but they left a highly energized and somewhat drunken crowd wanting to party long into the night.

And party long into the night we did as much of the crowd gathered outside The Full Moon on a chilly night to carry on drinking and toking and excitedly chatting the night away in a mass of old friends and new. Everyone was hugely satisfied that all bands that played Swamp Feast gave it their all and delivered quality tunes and we all had a loud ringing in our ears the next day to prove it.


The Full Moon club is shaping up to be a legendary live music venue and the South Wales heavy music scene goes from strength to strength because of their constantly great bookings on a regular basis. Much gratitude goes to the organizers of Swamp Feast for putting on such a great show.

I also want to give special thanks to gig snappers Jhons Ramirez and Paul Scott Thomas Photography for kindly contributing photos of the night and also to Sam Holland for making it happen so I could include these photos for all to see.