Sunday Sludge: Blackout - "We Are Here" 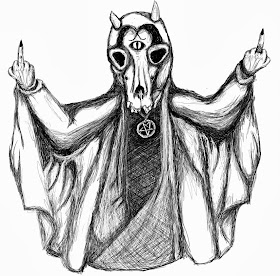 When Brooklyn trio Blackout formed in 2011, excess became less an experience and more a lifestyle; a pre-requisite. A cold, sooty floor suits these bruisers just fine when it comes time to call it a night. Luckily, they'll first leave behind a slick trail of gargantuan stickiness, a thorny half-hour of trippy black riffs wrapped with swirling sludge. Their debut album We Are Here is slated for release on October 25th, leaving you four weeks to cruise curbside bins for empty cans.

Loaded with screeches, twitches, and six hits of heady fuzz, We Are Here moves between massive sludge rhythms, ashy stoner passages, and sparse pockets of simplified doom. Present throughout is a rubbery weirdness, a sporadic psychedelia that sways as much as it stomps. The sound is true and solid, evidenced by the band's approach. There's no over-thinking here; just three heavy-hitters, their seasoned sounds, and what is quite obviously a basement littered with cans and bottles.

Hymnal darkness links opener Indian down through Seven, veiling vocals through a coven's wooded rendezvous. From howls to warbles, Christian Gordy and Justin Sherrell envelop listeners and thicken their perceptions. Adding to the creep factor are echoed taunts and encircling cackles on tracks like Columbus and Smoker. Scan for black ice and grind your teeth as you wait for the hit to take. When it does, careful where you throw yourself. Smoker's incessant chug leads to a dazing bedspin, but don't pretend you didn't want this.

That sub-sickness you're feeling is likely Taryn Waldman's skinwork. Blame the shifted rhythms on her choppy, cavernous thumps. Amnesia is merely a collateral consequence, as the track faces west and burns like a good time gone wrong. Swelling, pulsating... the cracks are all filled, and catastrophic doom slams downward on the confident lumber of Anchored. Stoner fuzz and glazed frets serve as bonus material. It's all here and it's all good.

If it's too slow, you're too young. That cloud's been hanging in our basement since 1970, so don't show up racing out of Hot Topic with pimples and a hard on, calling your favorite band heavy. Blackout get it right, hammering jam after jam, pound after pound. The smoky swirls buzz with electric accusations and shock-therapy repressions. As you frantically peel off the webs, We Are Here expands and looks straight down. Blackout can explain it to you, but they can't understand it for you. Your skin's only gonna get thicker. Just don't freak out when it snags and breaks open on sharp branches.


For fans of: Melvins, Horn of the Rhino, Fistula
Pair with: Hofbräu Oktoberfestbier, Hofbräuhaus München. Lots of it.