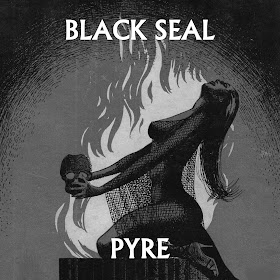 I'm a total sucker for nostalgia. Being bombarded day after day by what's new and what's improved generally makes me wanna spit. I miss landline phones, I miss borrowing friends' cassettes to make copies for myself, and I tend to get emotional when Fast Times at Ridgemont High is diced and dubbed to air on one of 350 television channels I don't need. So a sound that can send me back with a single fucking riff is one that I'll give strong consideration.

That's not to say I dig it when bands cut their heroes and paste their best impressions. With an endlessly expanding catalog of human experience, simulacrum is difficult to dodge. Is it at all possible to sound entirely like yourself? Florida's Black Seal make their case on the five-track Pyre by stirring a cauldron of 1970 Birmingham meets 1977 London and tossing in dashes of 1980's bong rips. That all probably sounds self-contradictory, but lacing the bouillabaisse with psychedelic glaze and just a tad of sneer is about as close as you'll get to fresh these days.

You'll find N.I.B. heaviness here, sure. The slow, acid-dripped doom riffs of Scorched! immediately craft a smoky atmosphere and you start to envision your drop-out friend "packin' that shit." He might not like it when we're thrust forward in time, if only briefly, on fuzzy hair-trigger thrash. As a whole, the opener is a dense amalgam of homages strewn with dark vibes, man. Wavy Gravy warned you about that brown acid, didn't he?

The midpoint of On This Day You Lose Faith glows and warms with wholly enveloping fog and viscosity, so we can't fully escape Sabbathian nods. Led on the bass of Thomas Beals, this winter sidewalk is lined more with regret than thin ice. Spitting embers into a revved-up Hetfield shuffle, this track essentially finds the band hitting every cylinder between spirals and plods. Punk's straightforward clarity shines through Astaroth Crowley's matter-of-fact vocal, echoing Rollins and Graffin but ultimately making us question whether Black Seal fit as a Sunday Sludge feature. The way this track marches and announces its own presence, however, renders categorization completely irrelevant.

If you absolutely MUST find sludge qualification, look no further than 80 seconds of The Descent (Intermezzo). Über-heavy with the added bonus of stoner repetition, this dragging reprieve would have My Bloody Valentine written all over it if it sounded more like a dream and less like a fucking nightmare. It's far too brief, but it channels well the malevolence of Conestoga Breaks Down. Smoke and fuzz hitch to the slow sludge rhythms that truly justify why we're here on this Sunday morning in the first place. The closer is choppy and flooring, a slow-motion blast of buzz and stoner sludge roll-out. We need more than five tracks when you've got us feelin' this good.

As we've learned, psychedelia saturates Pyre. Black Seal look back, look down, and look like a band that's primed to take a huge step forward. Chanted, candle-lit vocals become pained howls, Robb Erwin's tin-barrel thumps marry tambourine suspicions, and the album's twitchy thickness lends itself to marriages of Deep Purple and punk's DIY ethic. You'll pass through cobwebs, but they'll struggle to stick. At times slow-swung, at others completely chest-pressed, Pyre is that fleeting meld of tradition and progress. A band pushing the genre while honoring heroes. Pluck and nod, Black Seal... you've got our mark.

For fans of: Black Sabbath, Deep Purple, The Wipers