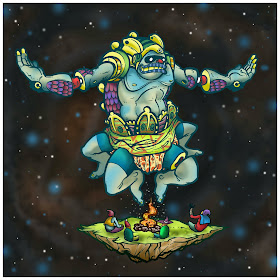 Maeth are different. Very different are Maeth. They sound like themselves although if a category they must be placed then it'd be post metal, sludge, doom, progressive, heavy metal, ambient, drone and psychedelic etc; for they are all those sounds plus more and often all at once. My jaw rested firmly on the floor while I sat bolt upright staring in a wild gaze at something, I don't recall what, while this incredible noise oozed into my ears and left me feeling cleansing waves of vibration surging up and down my spine.

Maeth follow their brilliant debut "Horse Funeral" with a masterpiece of experimental metal that, if you appreciate such infinite potential metal explorations, will leave you as stunned as I am at what I'm hearing, for the third time today. What Maeth have created with this album is immense in its variety and it contains everything I like to hear all blended together like a master artist does with paint, palate, brush, canvas and easel. "Oceans Into Ashes" is a veritable feast of sound with each metal morsel being as equally sumptuous as the last.

It opens with the 2.5 minute "Prayer" with seagulls, a small motorboat that passes by and gently soothing acoustic guitars that drift into electronic take-off's and then we're taken straight into the triumphant post rock and metalisms of "The Sea In Winter" which hints just a little at the journey that lays ahead.

Then comes "Nomad" which for me was 10 minutes 50 seconds of sheer amazement. This track has everything and everything is played so well and sounds so good that I had some kind of auditory orgasm.
It opens with a feedback drone that leads to soul stirring guitar twangs and a phasing electronic buzz until a bash of snares launches the track into double fist raising metal surges and hugely satisfying post rock finger work. Things suddenly twist into a weird almost prog sludge that boarders on math metal until it morphs into crusty sludge in the style of Downfall of Gaia, Monachus and Fall of Efrafa. Thunderous tribal drums then lead to drifting drones and chaotic and mystical tribal pipes that build an uncomfortable tension towards jagged rhythm'd post metal and eventual heavily crushing doom that ends in pleasant guitar soothings. Phew!

What follows then is an epic journey that will leave you all starry eyed and full of wonder at how life enhancing our united musical preferences are and Maeth celebrate this with an album packed full of the most pleasing of metal in all its many morphing forms. I would only be doing Maeth and this album a disservice if I were to review each track in turn so I urge any that read this to delve into Maeth and be ready for explorations in metal that will leave you stunned. If not then you're not paying attention. "Oceans Into Ashes" is a long album at 11 tracks with 6 of them running close to or over 10 minutes each but at no moment did I lose interest at all in the 3 sittings I have had with it so far today.

This album will definitely be on my best of the year list.