Full On by The Freeks 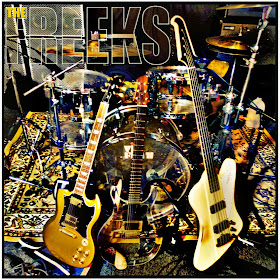 I'm going to get this out of the way right now. The members of The Freeks were in other famous bands. This will come up in all the other reviews, and some time will be paid bowing to the alter of the past- but in this review I won't focus on those bands, because what The Freeks are doing now is great and important.This isn't some last ditch effort by musicians hoping to capitalize on the cool they peddled years ago. This is the real deal folks. The band sounds energized, with the grit of the Stooges and the space of Hawkwind and twists that can only be described as freeky.

Full On kicks off with Big Black Chunk, a heavy spaced rager with vocals that lay the framework for the spaced and psychedelic tunes that dominate the album. The next track, Weirdness offers the contrast to the spaced jam the preceded it. The Punkish vox sound like they are straight from Detroit Rock City circa 1968 and wake you up before yer pulled back to space, down The Secret Pathway which could be the soundtrack to a journey through a wormhole in some odd galaxy. Splitting Atoms is a pastoral pysch jam, which could be sung around a campfire on Mars. On a Whim offers stabbing keys and the intense punk vocals of Weirdness, and their appearance is a helluva way to keep you grounded, lest you float off into he ether forever.

This album can't be recommended enough. The spaced jams are free and tight. The punk jams are tight but loose. The whole thing is fun, and if you've been thinking of a way to play your Stooges records at the same time as yer playing your Hawkwing records, just put this one on and save yourself all the trouble that thinking can cause.

And for those of you who are sitting there, pulling out your hair, wondering to yerself "what are those original bands he talking bout?"

Here's an older tune that shows their Psychedelic proclivities.