In Case You Missed It: Gareeda - In Blood 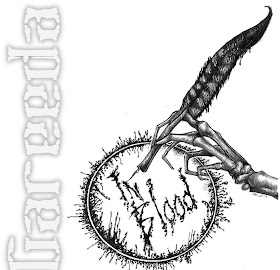 This week I owe the ultra-cool blog Stoner Rock BBQ a big thank you and a fuck yeah for opening my eyes (and ears) to Edinburgh, Scotland's Gareeda.  A few weeks back, those guys featured the band's 2012, self-titled debut with a side of pulled pork and corn bread and then washed it all down with a killer blonde ale.  Needless to say, I was hooked on all accounts.  And seriously…if you dig killer grub, great brews and badass tunes and you haven't checked that site out, I'd highly suggest that you do so.

But enough about that, let's talk about Gareeda.  A little research tells me that after recording said debut, the band parted ways with their singer and decided to carry on as a trio.  With each of the remaining band members sharing vocal duties, Gareeda re-entered the studio and laid down the four ridiculously fuzzed-out tracks that make up their new EP, In Blood.  Take my word for it, you're gonna love this one.

The opener, "All I See" rides in on a blistering riff from guitarist Stu Gordon as the band straddles the line between punk rock energy and stoner rock lethargy.  And as much ass as that kicks, its nothing compared to the song's closing breakdown where the band seems dead set on showcasing their knack for laying down the groove.  Then comes the title track, which…and this is no bullshit…may be the best song I've heard all year.  With a QOTSA-like quirkiness, a funky ass foundation (thanks to bassist Toni Martone) and a hook that's so damn catchy it's like Brian Wilson smoked up and down-tuned, this is the one that'll cement Gareeda as a band to keep an eye on.

"Last Orders" is chock full of fuzzy guitar tones, vocal harmonies and jazzy fills from drummer Michael Branagh and if I didn't know better, I'd swear it was written in the middle of the Southern California desert, not on top of the seven hills of Scotland.  And then "Arkham Vale" closes this EP like a sucker punch as Gareeda mix up their laid back stoner grooves with enough chugga-chugga metal riffs they'll have you looking like a bobble head by the time it comes to its abrupt end.  Look, if the goal of an EP is to whet the listener's appetite and leave them wanting more, then consider In Blood a rousing success.  I'll be following Gareeda wherever they go from here, and after hearing this one, I'd wager you'll be doing the same damn thing.  Don't miss it.