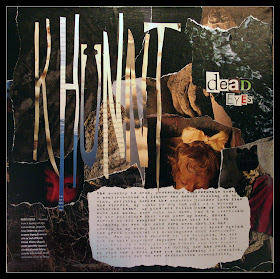 Apparently there's nothing wrong at the neighbor's house. I could've testified to hearing someone being brutalized just across the driveway considering the screams and chaos emerging from an unpinned source. That's the problem with any decent pair of headphones. I find myself ripping out the buds and pausing for fifteen seconds to make sure there isn't some primitive beast darting up my stairs. Even if the old dude next-door enjoys the company, I still feel like a tool for my 1:00am visit to ask if he's been stabbed.

As it turns out, Newcastle's Khünnt were the source of confusion. The off-shot bloody Barbie doll being clawed to shreds was the band's vocals. Two tracks on Dead Eyes chew up thirty-six painfully awesome minutes and, depending on your pain threshold, can prove to be either the best or the worst half-hour of your day. Soiling everything with a medieval meld of sludge, drone, doom, and noise, Khünnt deliver a crushing couplet of dried blood and cracked femurs.

Boiling down to a simple Side A and Side B format, these songs celebrate misery and misanthropy. There's no good son / bad son dynamic to be found; these sordid "experimentations" burn with malice aforethought. Side A, numbing with a long-opening Peterbilt rumble, screech and hum just long enough to nurse hope before an agonizingly slow smoke-soaked descent. Burning fuzz saturates the ice-pick barbs, riffs are too fucking gargantuan to trivialize in a wordy weekly column, and rhythms drop like a slow-motion jump from a jagged cliff. Watch your footing, dipshit. If the fall doesn't kill you, the anaphylactic shock and peeling flesh will. At times we're drowning in drone. At others there's one lost vocal crying out for another, eyeless and stunned stupid. A drumkit is flattened behind an endless reel of mayhem, while listeners are more than a little troubled.

Side B is at once the album's more malevolent and more merciful number. Rusty chains and glowing eyes decorate this hollow corridor, poking and bleeding out a bleak streak promised on Side A. Scorching guitar squeals, frayed strings, and a dance with crashing planes are just a few highlights among the swells of feedback. Call it cockeyed sludge-doom intoxication, buried tempos choke on loosened earth and dive headfirst into an archaic violation of the innocent. Riffs outlast the drone, but that commanding vocal torment again gives pause. The quickest of churns emerges only briefly, giving in and immediately going knees-to-sky for the heavy drone element at track's end. The squelch acts as the final snuff in a series of death-rattle gasps, closing the record and extinguishing the agony.

I'm shaking my head. The sounds merge and split and splinter, leaving listeners with no road map on what to expect. Through and through, Dead Eyes is relentless and crushing, drawing out fears through means of improvisational extraction. Recommended for listeners with a strong stomach, this sludge goes a step or two beyond just being dirty; this is disassociative clamor rupturing your insides with a carving fork. I'm not telling you to ignore your instincts and assume the din is Khünnt's doing, I'm simply saying you may need to leave on your nightlight.