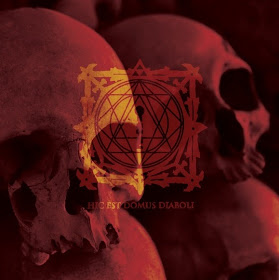 Call yourself an expert all you want, Dr. Griffis, but distinguishing between "cult" and "occult" based on a mail order degree from some phone book university doesn't qualify you to tell me the difference between a puddle o' sludge and a puddle o' shit. Your right arm is God, your left arm is Satan. Full moons, pentagrams, numbered sequences, dismembered bodies... Ah, hell. I don't wanna get into this with you right now, Dale. It's Sunday morning, you've already done a fine job of pissing me off, and I just need some doom to go with my coffee.

Zac's Double Dose introduced us to Cult Of Occult more than a year ago, pumping the French sludge/doom quartet's self-titled effort as "deafening repression." On HIC EST DOMUS DIABOLI, the band's second release in as many years, the wrought toil and scabbed senses stretch and stain between thick slabs of crushing riffs and pagan rhythms. Is there any significance to the fact that this album contains three tracks? Well, not nearly as much as what these three tracks deliver.

Squeaking and squalling between grinding teeth, In Vino Veritas soaks its bones with long-opening feedback. Cult Of Occult take their time boiling a gnashing buzz that sticks like sweet, pureed spinach. But calling their sound "doom" is a vast understatement, evident by the harrowing filth and shrouded, cavernous vocal clubbing. The bookends of hums and raining flames can't keep the anguished licks from stealing center stage. This sound won't appeal to anyone looking for destroyed hope; it's likely to entice those who never held any hope in the first place.

Where many bands seek to exorcise demons, Cult Of Occult welcome malice and ask if it needs any help. Requiem is carved hollow at its midsection, slowing from a trickle to a drop-by-drop struggle. Labored breathing and a cracked sternum may form a relatively good day as the band lights up and singes elemental distinction. When the track rises to an enraged second wind, you'd better have your path figured out. Light a candle? Curse your darkness? This track does neither. It's too busy cudgeling your skull to consider your disposition.

Not nearly as self-indulgent as it sounds is a seventeen-minute emergence of assured and expanding depravity on Magna Eripe. Slow, piss-puddle caution quickly relents and your sermon is destroyed. Body-doubling riffage sends all convention and expectation due South, darkening all it encounters and shoving a bootheel into your larynx. The ungodly thickness spirals into viral filth, coagulating only to be slowly ripped apart again. Massive walls collapse and the disc's denouement is a sonic shroud of weathered submission. It all led up to this, y'know?

Years ago, a band like this would have been marginalized, left to carry out their aim in secluded woods and hidden caves. Cult Of Occult don't seek to masquerade Satan as an angel of light; we're fully advised of what's happening, and this band shoves it down our tender throats. The rhythms are slow, the riffs are absolutely gigantic, and the altar is denigrated and defiled at the hands of otherworldly sludge. Forget symbolism and suspicion; focus more on what's readily apparent: this evil isn't hiding from anything.