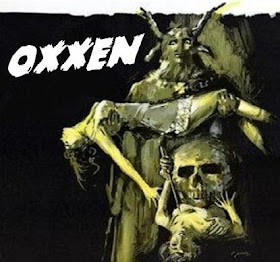 Had I just driven east a bit further, I could've avoided all this shit. Last weekend's road trip to Memphis brought along an accidental stumble into a hip-hop joint, countless panhandlers begging for leftovers, and a saucy southern couple that I'm pretty sure wanted to trade weird sex with my wife and I. We returned with countless stories, but what I didn't find was anything that would interest the Sunday Sludge faithful. But hey, I maintained my curiosity on whether there was some toxic Tennessee thickness I may have missed. I went lookin' for trouble, and I found Chattanooga's Oxxen.

The band's loose-hipped, bong-ripped self-titled triptych of southern stoner-sludge is fat with varied tempos and rattled groove. Fans of Orange Goblin and High On Fire are gonna rub their gums with Oxxen's long-cut blend of silt and glowing embers. Boasting 24 minutes of shifts and stomps, this EP is damn-near impossible to sit through without destroying your musty basement bedroom.

The slow stoner buzz of This Shit Ain't Exactly Thunderdome wears off with a medieval drop of repetition and ominous rhythms. Smashing everything in sight like a punctured cement balloon, this lead track establishes a tone of unpredictability via low bass dregs and lurid, grounded drum patterns. Bill Robinson's guitar buzzes above the slugs, while his vocal is raw and varied. Oxxen have us pinned with splintered sticks to the bottom of a steaming bog.

The High On Fire influence is fierce and immediate on the double-kicked, flesh-bubbled Stoic Men Under Ancient Lord. Passages of buzzing fans initiate a difficulty swallowing, a sort of looming mothman fear. Heavy on cymbals and long on shit-hot guitars, a choppy tightening of the reins pares down this cruiser. Intense glances precede a slow, sludgy mudfight. The beasts have circled and you've got shit in your pants. Luckily, everything around you is equally caked with hot filth.

I didn't figure the EP's eleven-minute closer could match its midsection, but goddamn... Riddle Of Steel is a crunchy, full-flavored grip on shifting stoner-sludge mastery. With as mossy and dense as this track is, I'd advise it can only be fully appreciated at maximum volume. The vocal has echoes of noise metal, while Dimebag's Washburn pullback is summoned and celebrated. Tom Thrash Childers thumbs slower and slower at a club-footed stomp around a fire, a fire built for a doom-dicked Sturgis send-off. The eleven crushing ticks reach an agonizing curb before the scratchy pepper of shrapnel returns. Increasingly frayed but somehow bound together by twigs and burlap, this is one track to keep hot and brand on your arm.

It appears Oxxen have been at this for a while. Calloused and weathered aren't the right terms, simply because they manage to sound fresh and open-ended among all the overgrowth. To be succinct, we can simply say these three tracks burn hot. You don't know where it began or how it'll spread, but it's that good, slow crawl toward an elusive buzz that makes this EP so enticing. Like the first shot, the first deep hit, or the first full-out fucking dive into the fire, Oxxen craft a blazing blend of stoner-sludge metal that numbs your senses.