The Stoner Rock world is chock full of magnificent, electrifying music that bests anything, ANYTHING, played in mainstream forums. It amazes me that none of the publications I read, whether online or in print, seem to be aware of what goes on in the world of low tuned fuzz. Queens of the Stone Age gets prominent billing for an album that is a shadow of anything Kyuss ever produced save, perhaps, their initial release. Black Sabbath returns after several decades with a worthy effort that has everything but perhaps the heart of what once was, heart that now reverberates throughout the Stoner Rock world with bands that have taken up the mantle, trying desperately on one hand to achieve what the Black Sabbaths of the world have already achieved while simultaneously achieving what those aging bands no longer can. Heart is the key, and hunger is the driving force. Without hunger heart can't live. Without heart, hunger is absent. Perhaps the music we review on Heavy Planet reaches a small and passionate audience, one whose nearly matches that of the architects of the sound we crave, but I believe we have keyed into the absolute best music alternating current has to offer. If mainstream hasn't clued in on that fact . . . well, then they're relegated to listening to the Kanyes and Lumineers on offer, and pity to them, I guess. I'll take Estoner and Motherslug, today's featured Stoner Rock generators, any day, any time. I'm thankful it's there to take.
~~~~~~~~~~~~~~~~~~~~~~~~~~~~~~~~~~~~~~~~~~~ 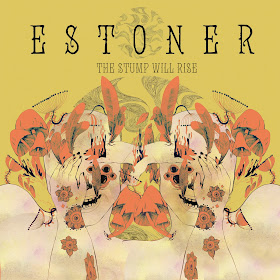 ESTONER - "THE STUMP WILL RISE"

Okay, I'm late to the party on this album. It was released in October of 2012 and I have only recently become aware of its dulcet tones. Hah! Dulcet tones. Yes, but in a low, fuzzed out, distorted, shredded scrap metal sort of way! Estoner grind and slice through thick slabs of iron and steel with twin guitar shredders and a vocalist for the ages.

Estoner became a full band in 2011 and spent months on the road honing their sound. A mini release of 3 songs during that time quickly sold out and gave the band impetus to create this septet of massive, deep metal melodies of psychedelic tendencies.

The album opens with the superb "Greenseeker", a perfect representative of all that's great with "The Stump Will Rise", nearly 9 minutes in length, heavy, low, and deliberate, and showcasing both melody and Tomlins' unique, haunting vocals. Nowhere on the album is the mammoth driving power of Luka's bass more present than on track 2, "Meet the Abyss". "Darth Vader Has a Hangover" opens with an incredible duet of synchronized stoner rumble and a serene, almost acoustic treatment that morphs quickly into sheer power and monstrous driving riffs in an ode to the timeless space cowboy classic. "Stump" is an incredibly intriguing mix of deliberate driving power, and wild, nearly incongruous sounds dashing in, out, and around the methodical onslaught of the master melody. "Level 5 Wizard", as you might expect, takes a more ethereal, spiritual journey, while never leaving behind the heavy machinery on an extended trip of color and emotion, while "LSD Vampyr" continues the smoky, hazy journey of metallic fuzz, neither song to be outdone by the mega trippy, ultra shaggy "Mindweasels".

This album is one of a kind and if you are a fan of the fuzz and an appreciator of metal melody, as well as relishing singular vocals, you should find this album a cut above most. I regret not finding this jewel last year because it most certainly would have made my top 20 end of year list. It's the kind of album that gets better each time you listen to it, and sounds better with high quality headphones cranked up beyond what is healthy for these old rock and roll ears. 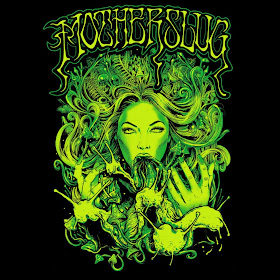 Whenever I see that a band is a five piece I tend to get excited because most of the time it means dual guitars, which is certainly the case once again today with Motherslug. Guitars are what set the great music of the Stoner/Doom/Psychedelic world apart from all others because guitar is used to perfect effect much of the time, cranking out low, loud riff rhythms while shredding the dark energy of the universe with searing light beams of power and brilliance. Motherslug do that in spades, as they say. The guitars permeate to the core, to the very essence of existence in this powerful half hour experience.

Motherslug hail from Melbourne, Australia, having formed very recently in 2012 with what began as a mutual admiration of the music of Kyuss by

who began jamming together and discovering a propensity for the low end heaviness of stoner rock, and so decided to add to the mix

who brought incredible depth and dexterity. It took some time for the fledgling band to find

to round out the instrumental sound. It took several months more to find the right fit for the final instrument, but then along came

a unique and perfectly matched talent whose vocal abilities are supreme and immediately evident when you first listen to Motherslug play. While his pipes are reminiscent of many of rock's great wordthrashers it retains its own unique and incredible sound.

This is a band that displays it all in their songs, and while the starting point for them is this self titled 4 track EP, it is very much massive in content and quality, providing riveting and explosive low end brilliance.

The opening track, "Symptoms (of the Human Race)" hearkens back to classic sounds of seventies metal as well as evoking the nimble melodies of high desert masters of the nineties and beyond. "Rollin'" carries the gargantuan sound forward with a classic blues rock theme married beautifully to massive metal riffs and licks of gargantuan proportions, overwrought with spacey, haunting laser beam solos. The deliberate, "Devils Rise" is a slow rolling river of sound forcing its current of monstrosities to carry you along until you succumb to its dark depths, while "Space Man" lives up to its billing with a psychedelic din that sits squarely on top of your chest threatening to interrupt the natural rhythms within with an intruding enormity of decibel distortion, leaving your only recourse to yield to the mercies and vagaries of its low tuned capriciousness.

"Motherslug" hits the mark dead center with their maiden release, providing a worthy collection of massive stoner melodies. I look very much forward to their first full length album, but I also simply look forward to once again spinning this beauty up once again.