In Case You Missed It: Cough/Windhand - Reflection of the Negative 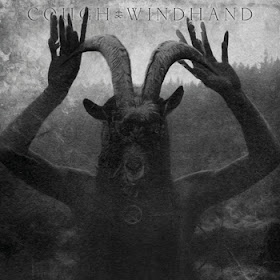 It wasn't all that difficult for me to discover that I'd missed this split from two of Richmond's heaviest exports, because the stench from this kind of filth just grows stronger with age.  Apparently this mold covered masterpiece has been festering and fermenting since its release back in April, so now seems like the perfect time for me to feed it to you good people.  Featuring a single, sickly saga from Cough that clocks in at over eighteen minutes and two equally depressing dirges from Windhand that, when combined, span the same, Reflection of the Negative contains enough disheartening doom to keep you looking nervously over your shoulder for the foreseeable future.

Let's start with Cough's offering, which is an epic monstrosity called "Athame," appropriately named for the ceremonial dagger used in rituals and witchcraft…in case you were wondering.  Joey Arcaro's colossal drums open this calamity, setting the tempo of a snail's march, before the unmistakably chilling sounds of an organ's grind creep into the mix.  Guitarists David Cisco and Brandon Marcey enter the fray with suffocatingly heavy riffs, as does bassist Parker Chandler (the common link between these two bands) whose ghastly gurgle completes this wretched refrain.  Collectively, Cough lulls you into a coma for the first half of the song's run time and then violently shifts gears by altering the rhythm, adding ample amounts of feedback and distortion that become more ominous as Chandler chants, "the time has come for sacrifice."  The apex of this heinous hymn is reached at around thirteen minutes (appropriately), when the band lurches into a bonafide groove laced with enough wickedness to leave Electric Wizard cowering over in the corner.  You're gonna want to check this one out.


While just as foreboding, Windhand's contributions to Reflection of the Negative are less gradual, which is simply to say, they get right to the point.  Other than a brief introduction of feedback and reverb from Asechiah Bogdan and Garrett Morris, "Amaranth" boils over immediately when the guitarists' down-tuned riffs combine with the rhythm section of drummer Ryan Wolfe and of course, bassist Parker Chandler, to create a gloriously demented rumble that could easily wake the dead.  Dorthia Cottrell's ethereal vocals emerge as if through a haze created by the band's dense and heavy sound and the resulting amalgam is astounding.  "Shepherd's Crook" is the second track from Windhand, and its both longer, at nearly eleven minutes, and more unsettling than it's predecessor.  Opening with a buzzsaw guitar that drills its way into your conscience, the band eventually settles into an unsettling drone that'll leave you trance-like, until a guitar solo takes shape in the foggy chaos and you latch onto it like a lifeline.  Cottrell's muffled moans reach at you as if from the grave and before you know it, Windhand have you thinking bad, bad thoughts.  This is the sound of doom my friends…dirty, filthy doom.  You should do your best not to miss this one.