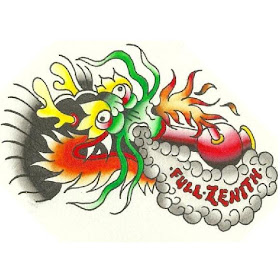 My jaw's been left on the ground a few times as I scratch my head wondering where bands come up with this shit. I gave up on guitar when my mom told me dinner was ready, but I spent countless hours in my room preparing for an interview that nobody would ever read. I'd talk about touring, brush aside compliments, and spend the bulk of my time highlighting influences. The list was endless, and to this day I can still hear myself saying stupid shit like "Believe it or not, I spent my formative years nursing Old Milwaukee with the jazz monks of some town you've probably never heard of." What a fucking asshole.

But when a band honors their influences and uses them to construct an entirely fresh bouillabaisse breed of metal, I'm hooked. Louisville's Full Zenith aren't gonna let you in on the secret. With their Demo 2013, you'll wonder if you should step aside to observe or just let the train rock you square. Equal parts heavy and heady, these cats tear apart sludge and doom riffs with more than a few thumps in the night and no intention of checking blind spots. When the tempos shift and you're left holding your dick, don't pretend that you knew it would happen.

Tentative but never at-all cautionary, Into The All Seeing Eye's slow entrance is flattened by the slow dirge of bulldozed rhythms. Scorched-earth repetition is shoved aside by lightning-round thrashes wrapped in a hybrid of Fistula's Corey Bing and Refused's Dennis Lyxzén. But the distant "fade into darkness" is more inviting than demanding. Sounds crazy, eh? It is. Drums coddle you, draw you into a corridor, and slip a burlap sack over your face to carry out this opener's true intention. The meters never quite match up, and you never quite get over how awesome it sounds.

If violent immediacy has ever been appropriately laid to tape, The Final Chapter is the result. The track abruptly snags the e-brake and stomps the upper-level, digging through closets and peering out rear-windows. Thick-rolling heaviness is, I suppose, a defining trait... But the good cop/band cop vibe is more likely a good trip/bad trip contemplation. Dual vocals are examined in brilliant juxtaposition and the thumps in the night won't quell your paranoia. Question their motives if you can find the time, but Full Zenith won't wait for your dust to settle.

Become Death holds a true sludge cadence at times, sandwiched between thrashy hardcore and weird, delightful fuzz. Bass growls on a Melvins-motivated chimney-sniff, tapering alongside guitars on burnt fingers and splitting with a fuzzed-out spiel. Faulty wires fire at billowing clouds, but the return of warm fuzz is enough to make your night. It may be too short, you'd say. But think on every song you've ever loved. Aren't they ALL too short? And I don't wanna draw-out parallels to 80's bay-area pioneers, but Suspended Disbelief is just that fucking awesome. Exodus-on-ludes, Testament-on-barbs, shit... it's slow, choppy, and your jacket's gonna reek. The churn lifts and thrash returns to dominance on abandoned patterns. But exercise patience; you didn't think Full Zenith had a little drone in 'em? The slurred spill of sludge melds with an Om-ish chant to warp out on UHF television.

What many present as daunting is actually incredibly refreshing on Full Zenith's watch. The jostling wakes you, but the struggle to breathe is equally jarring. Meld 80's thrash with the gigantic, drawn-out riffs of Sleep and you're presented with a challenge; how can the two marry? How does a four-track demo capture a quarter-century of metal's influence with no schlock, no fluff, and no biting criticism? I'm not sure, but Full Zenith fucking do it. Perhaps *ahem* variations on a theme are exactly what metal needs. But we fucking knew that! So when so many managed to screw it up, how did Full Zenith manage to fucking nail it?