Today, Followers of the Fuzz, we present to you for your listening pleasure 2 bands who wield the fuzz the way Thor wields Mjolnir, or Conan his broadword, or The Sword Saint, Miyamoto Musashi, his katana and wakazashi, not with reckless abandon, but with the epitome of skill, grace, power, and intent. These guys strike for the ultimate outcome, which in the case of the music is to deliver the killing blow of pure stoner rock awesomeness. This isn't to say you won't hear elements of other styles as well, but make no mistake, the power and the fury today are stoner fuzz at its finest.
~~~~~~~~~~~~~~~~~~~~~~~~~~~~~~~~~~~~~~~~~~~ 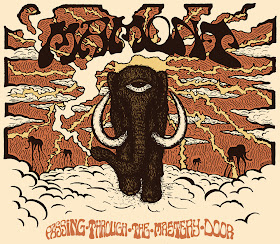 MAMONT - "PASSING THROUGH THE MASTERY DOOR"

Mamont hail from Nyköping, Sweden, a small town south of Stockholm. Members include:

"Passing Through the Mastery Door" is their first LP, although they have previously released an excellent self titled EP in 2011. While today we are promoting the latest LP released late in 2012, it is quite interesting to listen to both the 3 track EP and the later 8 track LP. The Mamont musical stamp is present on both, to be sure, in terms of song structure. These guys write beautiful stoner rock music, intelligent, fun, and exciting, all rare qualities when it comes to manufacturing notes, times, rhythms, patterns, etc. But the best part of listening to both the earlier EP and the newer LP is going from the exquisite songs from the 3 track release and discovering exponential growth in the song writing and delivery on the 8 song release. It's quite phenomenal, something of a pleasant surprise, something that generates excitement, appreciation, and admiration. Whatever it was these guys did to come up with the much fuzzier, more distorted, higher energy music laid down in conjunction with superb, stellar melodies on the LP is quite refreshing and deserves a full measure of thanks for anyone who thrives on listening to this rare breed of sound. Yes, we hear a LOT of great music, both old and new, on an almost daily basis, but to hear impeccably intelligent stoner rock is rare and to be treasured.

There is a story in "Passing Through the Mastery Door" according to the band's bio. The journey to discovering that story by listening through it over and over should be quite enjoyable indeed. I can't pretend to have unlocked the tale as of yet, so the best I can do is focus on the rapture of the sound.

"Mammuten" is the starting point where no time is wasted in unleashing the lumbering beast of fuzz upon an audience perhaps brimming with anticipation. Slow and purposeful, the huge low tuned guitar trudges forth soon to be accompanied by the signature stoner riffs reminiscent of much earlier stoner sounds found in Dozer or Truckfigthters. Ever so exquisitely and deliberately the song morphs into a psychedelic melange of distortion and guile before giving way to its successor "Jag Sår Ett Frö", carrying straight through on the fuzz carpet of distortion introduced in the opener. The hazy, psychedelic atmosphere carries forward as well with a haunting vocal that soon unleashes our first exposure to the raspy edged lyric delivery that can only be described as perfectly matching this heavy, deep pile music.

Full dose exposure to the vocals occurs on Track 3, "Creatures", where there may be as many as a half dozen beasts unleashed, if you count the dueling, snarling guitar riffs, undercurrents of richter scale bass, boulder crushing drumwork, and the aforementioned stylings of Mamont's vocal delivery via lead vocalist Karl Adolfsson, as all come together to tell the tale of the evil demons central to the tale.

Between "Blind Man (Part III)" and "Satan's Fasoner" we are treated to stoner rock of exceptional quality, with gargantuan waves of fuzz and cheese grater vocals extraordinaire, none perhaps more exquisite than "The Secret of the Owl" with its barely controlled urgency and  breathless delivery.

This is a rare stoner rock gem that unfortunately slipped through the cracks of my new release tracking system this past September/October. When I go back I see clearly that I had it marked as well above average, meaning in line for quick review. For some reason it got missed until now. But, better now than not at all, and while it may have missed out on end of year 'Best Of' lists, it certainly will get played over and over for years to come as often, if not more, than many of those albums that did make the list. 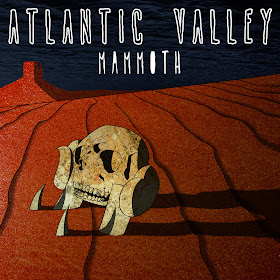 Atlantic Valley are a Spanish 4 piece stoner rock band hailing from Vigo, Galicia. This is a group of musicians who are just getting warmed up when it comes to producing rock music. They were the winners of a local band contest that spurred them toward recording and releasing their first EP, which, with 6 songs, is of sufficient length to satisfy that deep down craving for meaty, beefy, delicious fuzz. One of the hallmarks of the EP is the lyrics are both in Spanish and English, depending on the song, which does not detract from the slick melodies this new band of four have conjured around their low tuned and wonderfully overdriven delivery.

Bright and insistent fuzz riffs greet us on the opening track, "Summered Cold Office", with lyrics on the opener in English. The vocals are well suited to the music, never yelling the sound, but singing with a raspy deftness entirely suited to this heavy brand of rock. The tempo is upbeat and energetic for the opening minutes before the song segues into something more deliberate and purposeful for the closing minutes.

"Irreal" opens with a gigantic stoner riff that accompanies the Spanish lyrics and perfectly weighted vocals. Large and low the song is steadfast in its delivery throughout, steady in tempo, and sturdy in the blending of sound.

"Van Scape" kicks the tempo up a couple of notches from its forerunner, laying out heavily distorted licks undercut by immense bass riffs and insistent drum punches. Edgy and distant, the vocals completely complement the music.

"Loia" has an extended, memorable opening, placing much of the onus of the music on adept and agile drumwork, a theme that carries throughout this song of haunting eloquence and brutal delivery.

"Doom Exequo" has elements of stoner punk infused throughout the length of this superb melody. The shackles are dropped for an all out blitzkrieg onslaught from fuzz strings and raspy edged vocals, as well as Olympian drums and mountain devouring bass.

"Titan" brings in a psychedelic element to the band's stoner sound before giving way to their punkish traits once again. These are elements simply used as vehicles for delivery of deep pile fuzz along massive waves of distortion.

This is more than a valiant initial effort from an up and coming stoner rock band, for, despite the unpolished edges, it delivers 6 quality songs heavy in low, overdriven tones, well written melodies, and deftly delivered by gifted and motivated musicians. This album is that rare case where everything works all the time. I am certain you will enjoy this freshman effort immensely and, like me, look forward to their next release and its accompanying growth.