LP Review - The Inner Sanctum by The Cosmic Dead 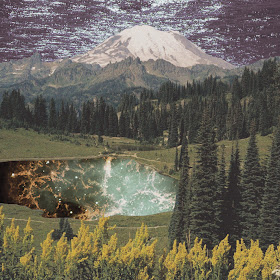 Having previously been reviewed on Heavy Planet back in 2011 as a "New Band To Burn One To" for their self titled album, there was no way I was going to let The Cosmic Dead's latest psychedelic beast "Inner Sanctum" slip through our fingers.

Born in the tough, cold city of Glasgow, Scotland, UK; The Cosmic Dead drop an album of 4 masterful psychedelic jams reminiscent of the best hypnotic wig-outs of the legendary Hawkwind and the likes of Neu and Amon Düül II. The Cosmic Dead play a mix of heavy psychedelic spacerock, Krautrock and experimental audio trips in a unique way that only a British psych band can do. I put this down to the particularly ancient and potent strain of Psilocybe Semilanceata that can be found growing in abundance on the fields and mountains of the UK and The Cosmic Dead's trance inducing mind transferals are a perfect soundtrack to the shamanic ritual partakings traditional to certain tribes of this land during the autumn/fall months. Whilst listening to this album I was flashed back to the last shroom season here and wished I had chosen to listen to The Cosmic Dead when I was lying horizontal on my couch, staring at a kaleidoscopic multi-colored and rippling ceiling, wide eyed and dribbling down my chin as I journeyed to the subconscious realms of weirdness. I certainly won't be forgetting The Cosmic Dead during this years shroom season.

The album takes off with "Gustav Björnstrand" which is an ode to a rather obscure Swedish physicist from what I can tell and of whom I can find very little information other than that he doesn't watch TV or read newspapers and believes we are currently living in an Orwellian nightmare. I can't argue with that and I join him in his rejection of main stream news and entertainment. I haven't owned a TV in years and have a great loathing for the British tabloids in particular. But I digress...the opening of this track does not start with a long introspective ambient space-out as one would expect from a band like The Cosmic Dead, but instead launches straight into a thick psychedelic jam with a hypnotic bass line and drifting trippy guitars and tight drumming that drives the track along on it's journey into the inner realms. After a few minutes there is an echoed voice of some narrative by an unknown maverick of the mind. Is this Gustav Björnstrand speaking? I'd like to know what's being said. The track evolves and builds as it drifts with easy style along the space highway sending shards of bright purple and yellow to twist and splinter my mind in its wake. The psyche-out continues to build throughout until our first destination is reached and we are firmly set within the mind expanded dimensions laid out by these sonic psychonauts from Scotland.

The journey then continues as we move ever further into psychotropic frequencies with "The Mass of Betelguese" and a quiet rising up the spine of pure psychedelic energy that then fills the space between your ears with a soothing massage of floaty guitar effects and laid back bass riffs and sparse percussion. This blissful drifting of meditative sound builds to illuminating crescendos and gently tripping drops of hallucinations for over 20 minutes in dazzlingly beautified and colourful spacerock played at it's very best. Your mind is wrenched open and in pours a myriad of visions the likes of which can only be experienced with huge doses of hallucinogens or 25 years of dedicated yogic practice while living in a tree dressed only in a loin cloth. The track ends with with an ecstatic breakthrough to even further in/out dimensions that The Cosmic Dead travelled to in this albums opener.

In the third stage of our grand mind trip with The Cosmic Dead we enter the "Inner Sanctum" and another 20 minute mind bender of trance inducing vibrations in the form of simple rhythms, all encompassing swathes of spacey guitars and hypnotic bass jamming building slowly but very surely towards a wild eyed and flailing arms freak out as the pace of the track builds leaving a throng of long haired and half naked space cadets writhing around in ecstatic bliss within a vast hazy meadow of many coloured flowers under a multi-bejeweled and deep purple night's sky.

The Cosmic Dead end their 4 stanzas of psychedelic instrumental poetry with "Hello, SATAN" which takes us into the darker occult realms but here does not lie evil and horror even though this track is as doomy as The Cosmic Dead go on this album. Dear reader, I know you do not come here for lessons on occult symbolism but I feel it is worth mentioning briefly that Satan is not necessarily the harbinger of spiritual destruction and the king of the fiery pits as so belovedly believed by those of the christian faith. Indeed, Satan could be understood on one level to symbolise the masculine generative force of nature, a modern form of the horny goat legged Pan and in Tarot lore the Phallus as the lingham to the yoni or the 1 to compliment the 0. This I feel is where The Cosmic Dead are going with this reference to Satan but I may be over presumptuous in my interpretation of the track. Nevertheless the initial doomyness of this track, which to me sounds more humbly somber than doomy; is left behind 6 minutes in to enter another psychedelic void of wonder and colourful waves of glowing visions but the solemnity is not broken throughout this journey from the darkness so beautiful. The spirit is raised up as the sounds evolve as a twisting and twirling mass of emotions bring one to higher levels of understanding beyond the sticks and stones of the mundane universe. It is not all sweetness and light within or without, but a balance of positive and negative, the ying and the yang, + and -, Α and Ω, as above so below.

To put it simply, this album shows that The Cosmic Dead are truly the one of the best heavy psych bands in the UK, if not this entire rock we call planet Earth that floats through space. They are currently in the last half of their current European tour so if they happen to be playing near you then go and see them, loaded up with a huge dose of the hallucinogen of your choice of course but if for whatever reason you can't make it then go buy their album now released by Evil Hoodoo on a limited edition pea green cassette in a handmade cotton sleeve. Very tasty.