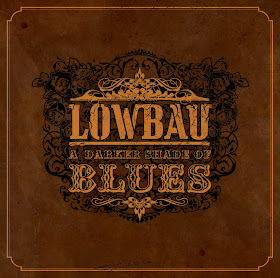 Nobody takes a sick day when they're sick. When the asshole across from your cubicle is absent from work, bet your right arm he's gonna show up the next day with a rehearsed response to "how ya feelin'?" Nights get rowdy, the town slut won't leave your porch without assuring "I never do this," and your childhood buds hate their lives so much that they'll buy you that superfluous shot just to avoid being alone at 2:00am. Look, dude... I was young once, too. Sometimes it's hard to keep up, and sometimes you can't face your day because you lost your ass last night.

I've got these Sundays reserved for a fuckin' reason. If I tried pulling this shit on Tuesdays I'd have a real hard time keeping up with my own bullshit excuses. I play both victim and offender, but it's certainly a struggle I created. If it's one pint beyond a doctor's orders, I'll manage coffee and a fresh breath. But I don't know how I'm gonna handle Vienna's Lowbau. All the southern-sludge memories are rockin' my frame this morning, and A Darker Shade of Blues is painting my reality a new shade of stunned.

Contrasting influences play a role on this thirteen-track sludge rattler, but bringing them to alliance is Lowbau's blue ribbon. The meld of C.O.C., Pantera, and Alabama Thunderpussy angles and vibrant narrations will leave a tapestry of brazen imagery that few bands can authenticate. At times somber in the south, others thick in rusty fog, A Darker Shade of Blues threw itself onto the hood of my car and glared me in the eye. I don't care what you believe or what you question, Lowbau crafted a litany of both queries and responses, here offering both for the picking.

Opening on the crisp acoustic strums of 13, A Darker Shade of Blues is pregnant with promise. The instrumental opener is distant and sullen, but the sliding shifts and low bass thumbs press forward and soothe enough to quell any doubt. The steel toed double-kick of The Prosecution Rests... green-lights a coked-out aggression that trips most bands. Groove and pull-back are a clear Pantera nod, but Lowbau breed their own buzz-saw beauty. The blistered brutality is met with a furrowed brow, unlocking the riff and pacing a slow sludge that echoes with swinging-cock solos. The closing stomp-stagger showcases a power; let's call this an opus of opiates, because this southern sludge is daunting.

A Million Years of Rain just might be the fucking best song you'll hear this year. Southern slides and tripping basslines stroll through the dark drop of sludge blackness as if they've been there before. What's placid and pensive grows worn and thick. Everything works here, staggering toward a denouement loaded with everything that's fucking incredible about this band (massive riffs, leathered vocals, guitar proficiency, and low-mud basslines) striking an undeniable harmonic(a) balance.

Oh, and sketchy subject matter is hardly taboo for this quintet. Consider the living-room stomp of Alcoholic, for example. The dixie-bounce hits heavy as fuck with low bass as a twice-baked stop/start dynamic dominates, but a drunk's lack of attention to detail takes center stage here. The changing paces are slick, sure... but you're focused on finding your lighter and swearing at your neighbor about exactly where the property line sits. When are you gonna get your act together? Nanny stutters with slow-bled abrasions, slurring and swaying as you stare at the babysitter's tits. Don't worry, the smile is lost halfway through when you realize this creep ain't kiddin'. There's a Tool-ish Intermission before the return of bass bounce and low-drawn dirty blues.

Slugging away at ticking minutes, The Theft of Time is so thick with butcher-block chops (led by Brea's drums) that it'd be easy to miss the chorus, the buckets of drenched guitar, and the incredible vocals scratched with bruised hands. The buzzsaws manage to dam up a bit, but Jesus, this southern-sludge grind swings a sledge at jagged rocks and comes out ahead.

There's a lot o' music here. Gnaw more than sixty minutes with the first twelve tracks and you'll doubt you've got the steam for a nine-minute closer. Shit, the loose-doom fuzz of the disc's title track is a strong snag of sooty, soggy sludge decay. Plug toward revolutionary snares all you wants, but southern-rock emerges. Rhythms clip slow as dust and tar marry to jam your lower lip with a buzz you won't get from Beech-Nut. Progressing toward an exhausting melange of sticky rhythms and double-kicks is just where Lowbau promised to end their night. Blues return on the back of hovering atmospheres and boggy diamond-point acoustic plucks, but you've already made up your mind.

I love a beer or two with my Sunday Sludge, but this is too much. Lowbau flew under my radar for too long and decided 72-plus minutes of my life needed what they were offering. They were right, but I'm too muddled to fish at this point. Shredded sentiments, primitive/distant drums, and a fuckload o' groove should carry Lowbau beyond their thick-misted influences. This depth, these vocal walls, and the echoes of the southern timber are incredibly enticing. Don't worry about tomorrow.