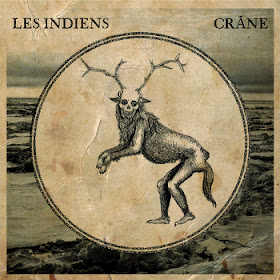 After offering up the tune Ed on the epic Heavy Planet compilation, Bong Hits From the Astral Basement, Quebec's Les Indiens are back with an awesome collection of psychedelic stoner rock. Said new album, Crane, is a swirling collection of riffy guitars and keys, inspired by the tunes and spirit of the First Nation's music and myths. I think.

The album starts off with Boucane, a riffy ditty accented by keys that circle and swirl like a stalking hawk.  Next up is Crane which starts off on the low end end of the cosmic spectrum, all throbbing bass and crashing cymbals. Soon the guitar brings the rhythm section in line and we're off. Creve-Coeur is next up and starts off soft and weird, soon building and turning itself into a chest thumping dirge.  Desert de glace straddles the doom/stoner divide, but soon finds its place as a soft stoner tune, never wallowing in doom's dark places. Mieux en prison comes next and offers the albums most memorable riff. Love Machine has an English title and is the most "normal" song on the album, with a verse chorus verse structure that's warbled over a heavy riff and urgent drumming. It closes an excellent album with a sticky chorus dominated by the song's title. Or maybe that particular lyric stuck in my head on account of it being the only one in my native tongue.

The vocals are clean and offered in French, but the groove is universal. I couldn't make out the lyrics. I don't speak or read French, but the great thing about music, especially the heavy groovy music offered up by sites such as Heavy Planet is the feeling the tunes elicit inside ya. It is amazing what can be conveyed with just a stack of amps, guitars, bass, and drum. And maybe some keys. But just some. Don't over do the keys.