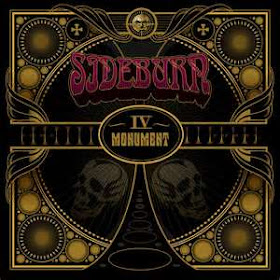 I grew up when grunge rock ruled the radio, and my old man schooled me on the merits of seventies rock. That said it's no surprise that I enjoyed the hell outta Sideburn's latest release, IV Monument. Here you get the best of both worlds. You get the tortured banshee wail of Chris Cornell over music that is ambitious and offers a variety of textures; just like those metalers of yore, the long haired types with grand proggy ambitions. I get a heavy Uriah Heep vibe from these guys, in the soaring vocals but also from their willingness to try any and all styles of the heavy stuff in their metal revue.

They've got the guts to slow things down and throw in acoustic guitar parts that are not that much lighter than the fuzzed or doomy guitar parts. And there's a lot to be said for bands that make albums like this. Those that live by the fuzz too often die by the fuzz. Hersey, I know. But that's how I feel. Without texture albums can come off as stodgy. The dynamic between heavy and light can and should be used. But that's enough of my pontificatin'. Here's some notes on the album.

First track is Diamonds and that ain't a Soundgarden outtake, but you might mistake it for one. Next comes Fire Water, slinking towards you like a snake till it rears its head and spits a Danzigesque dirge of heavy all over your trembling face. After that is Tomorrows Dream which for the first few seconds almost sounds like an eighties hair metal tune. The vibe doesn't last, but the riff is clean and carries the song to safety before Crossing the Lines ballads it's way into yer headphones. More visions of Cornell are conjured, but this time we're talking Audioslave. After catching your breath, the listener is doomed by The Last Day which is cooed by an Ian Curtis like vocal, which goes perfect with the icy stomping of the riff. And then there's Silverwing, the tune that might have single trackedly brought up those Uriah Heep visions I alluded to in the beginning of this review. And there's more, but the last three I challenge you to find out for yourself. I'm tired and my beer's getting warm. And I don't want to make it too easy on you. But fear not. You'll dig it.  So crank this one up, stop shaving the sides of yer face and enjoy. Find it here on Transubstans Records