LP Review: Eclectic Tail by The Curse of Wendigo 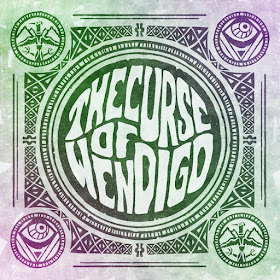 I’m no expert on the Wendigo myth, but I’ve seen the movie Ravenous, so I think I get the gist of it. It goes something like this- in times of starvation, people will sometimes be forced to devour other people. These drastic measures change the individual who does the eating; they become a monster with an insatiable love for the taste of human flesh. It might be the Hollywood version, but that’s the deck I’m drawing from as I write this review.

The band The Curse of Wendigo are a self-proclaimed psychedelic/doom band from Ukraine. They've just released their debut, Eclectic Tail on the label Destroy the Humanity Studios and it is killer. They crank out traditional doom riffs, with drone interludes and some mystic trance portions. You can bet that fans of all genres of metal will find something to sink their teeth into on this debut.

The first track is a brief intro that offers up some dusty harmonica sounds straight outta a Morricone Western.  Fittingly, this track is titled Clint Eastwood Comes to Town and it sets an eerie tone to what will prove to be an eerie album. The next track, Eclectic Tail, continues the mood set in the previous song, but the listener is now greeted by the tortured vocals of a singer that sounds like he was being eaten alive. Metal.  But this last for only two minutes before the mood shifts to a hypnotic, tantric drone. Then, seven minutes and twenty seven seconds into it the torturing begins again. Seamless.  Awesome.  Gloomy Friend continues the light heavy trend, but reverses it, going from light to heavy then back again. Endless Hunger boasts the most aggressive vocal, conjuring the Wendigo in full on feast mode, raging and stomping between solos and riffage. The Prodigal Son swaggers and boasts the album’s most melodic vocals. And the album closes with Fallen Treasures, the most ambient and droney of the tracks. Fans of post-metal and harmonica will be pleased.

I’ll go out on a limb and call this one a concept record, about the Wendigo and desire and violence and sinister urges and redemption(?). But  I won’t say this for sure, ‘cause the vocals are effect heavy and you can’t make ‘em out too well. But this doesn’t matter. When you listen to this album you feel what the band is saying, and that’s what our music is all about, ain’t it? So put your headphones on, do what you do, and enjoy the curse.