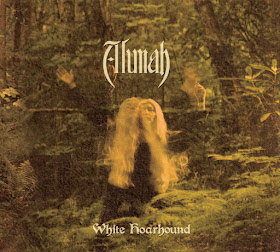 The sprawling and pollution stained concrete of Birmingham city, which lies in the appropriately named area of the UK known as the Black Country, can be considered the great womb of heavy metal and its splintering genres, having spawned such ground breaking and brain quaking bands as Black Sabbath, Judas Priest, Witchfinder General, Napalm Death and, a personal favorite of mine, Godflesh. But those are just some of the more well known bands from Brum (as it's affectionately known here), and with this latest release from Alunah, Brum has yet again spawned a band who have a direct link to the heavy current that flows through the dark land of the Black Country.

This past few years has seen a flurry of female fronted doom and stoner bands, none of which I'll mention here as you will probably know at least a couple of the more well known and successful ones. The lead singer of Alunah however, gives those particular bands a real run for their money. Her voice is simply exquisite and is a nigh on perfect accompaniment for the sound that Alunah make.

From the opener, Demeter's Grief, Alunah come with spaced out psychedelia preceding mighty doom riffs of low-end fuzz conjured from the earth as if tapping a vein of ancient bardic energy that has lain dormant for time immeasurable. I can almost taste the soil and the stone when the thick fuzz hits me. When I close my eyes I see hoards of robed up wizards carrying oaken staffs, a sacrament of psilocybin brews consumed and chanting huge bass tones at a towering monolith, drawing mother Gaia's nurturing flow of life giving energy to ensure a bountiful crop and a strong and healthy tribe. This is doom but it is natural earthy doom and it's very laid back in its delivery.

Track 2 is White Hoarhound and Alunah do not mess about here. They slam you immediately with chunky stoner grooves, the solid fuzz tickling the core of your brain and guitar licks of stupendous mind expanding proportions. The singers lyrics are delivered with sumptuous earthy vibes that put the listener in a trance; telling a story that could well have been penned by some vastly ancient scribe. It is spiritual stuff indeed; an ode to the old ways of pre-Roman Britain, ways that never really went away because they are recorded in the ground and in the rocks and in the forests.

Belial's Fjord, the third track, reinforces the pagan vibe that Alunah create with this album. We are treated to yet more low-end fuzziness and stomping drums and riffs of doom with vocals that drift through unexplored mountains and valleys filled with long stretches of deep dark water. What lies beneath nobody knows, but this must be the sound the  ancients used to move their huge stones vast numbers of miles.

Next is The Offering where Alunah offer up a slow dirge of fuzz and other worldly chanting followed by spine wrenching stoner rock riffage and a hymn to the pagan gods. It traverses huge expanses of sacred land and echoes around the temple of Gaia. It is indeed an offering and one that Alunah make in earnest showing where their heavy hearts truly lie.

The Chester Summer is track 5 which opens with sounds of an ominous wind blowing until a bass tuned to doom and stepping drums herald a plunging of thick warm fuzz and Sabbathian riffs cover you from head to toe entombing you in a cocoon of doom metal and words of praise to the solstice day of summer. The pagan tribes gather around a circle of stones to honor and pay tribute to the rising sun where they celebrate the longest day of light and the shortest dark of night.

Oak Ritual I breaks the flow of shroomy doomy fuzz with a psychedelic acoustic jam sounding like a pagan lullaby to an ancient forest of oaks. The robed up wizards gather again, walking in line towards the father of all oak trees that lies within the center, the vocalist singing a soft ethereal chant to awaken the forest spirits. Hypnotic acoustic guitar riffs sound a homage to the oak trees with an organ adding to the invocating vibrations. The ritual has begun.

Oak Ritual II follows where the riffs fall thick and heavy with stoner doom grooves that penetrate the earth, waking the ancient ones; the echoed airy voice of the mother goddess drifts around the darkness of the oak forest and over the empty fields forging an electric connection to the essence of soil, stone and wood. The track evolves into psychedelic drifts of sound until it builds to celebratory uplifting guitar licks and thudding totemic drums. The energy from the earth is now invoked and passes through those that are gathered for the supreme ritual of the oak.
But there is something hidden that comes after the ritual is complete so listen out for it.

Alunah are fast shaping up to be one the UK's best paganistic Doom-Metal bands and if laid back earthy fuzzed out grooves are what lifts your spirit to unexplored dimensions then this is an essential addition to your collection.

White Hoarhound is now available in green or white vinyl from Napalm Records or as a digital download from their bandcamp.