Sunday Sludge: The Canyon Observer - "Chapter II: These Binds Will Set You Free" 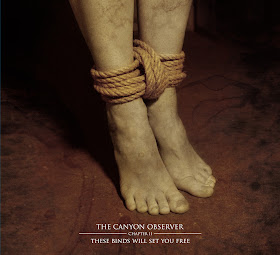 As overwhelming as Earth's size can seem, what's devastating is the distance separating countries, people, languages, and ideas. It's staggering to think there are countless corners of the world one will never see or understand. You can call music a universal language all you want, but that's not to say I'm ever gonna know what the scene is like in a place like Ljubljana, Slovenia. Pretend for a moment that you discover your new favorite band, they've blown your fucking mind with their perfect balance of style and substance, their commitment to crafting sound over pressing the flesh. But shit, now comes the realization you may never catch them live because they're not traipsing the states in a dented van and you'll have trouble even finding (or pronouncing) their hometown on a map. Well, for all the depravity the online community holds, at least there's comfort in digital downloads.

That a band as young as Ljubljana's The Canyon Observer (formed in 2011) can craft such sonic devastation on only their second release is stunning. Chapter II: These Binds Will Set You Free is a progressive and conceptual offering committed to the idea that patient acquiescence to that which is primitively and innately frightening is the only true path toward self-realization. Perhaps that's stretching things, given the Slovene tongue is hardly familiar to this ugly American. But the track titles, as adequately revealing as they are, capture the album's theme less than the patient and heavy-handed atmospheres drawn from the four distinct chapters.

Part I: As We Surrender To Lust is initially thick and choppy, spinning a buzzy stop-start dynamic that's as pleasant as it is jarring. The break employs an odd time-signature as TCO trudge toward an unnamed voice mid-chant. Guitars float on wisp and the post-metal sludge drifts to some hot, dark trenches. The most impressive emergence on the track comes in the form of layer after layer of heavy complexities. And just as elements hit the peak of density, those distant chants become judgmental, unsettling reprimands. The bouncing sludge bass line guides this excellent opener through a dark clunk you won't forget.

The slow pluck of Part II: And The Pleasure Of Pain ominously hovers and reminds post-metallers of why the patience of Isis and Neurosis hits just as hard as distortion and abrasion. A distant mist of voices circles, haunting with ambient trances. Imagine pacing a cool cavern littered with stalagmite spires alongside an eerie, yet strangely comforting, vocal companion. When you're this badly burned and blistered, that shrouded guide is all you've got.

I won't use the term accessible, but it's safe to assert Part III: We Can Descend Into The Unknown is more discernible and concrete than Parts I & II. That sounds strange, given the track's doom lean and nuanced guitar pullbacks. Progressively, vocals move from hope-laced toward an incredible wall of agonized observation. TCO become all encompassing and, amazingly, full of warmth. As listeners have drifted, so too have their reservations. A cool, tiny crack has grown into a clean and inviting ascent, mysterious as it is. And this nine-minute exposition wasn't turning down the lights without bringing back that sludgy buzz, fully balanced with sharp licks to juxtapose the thickness. This is where patience, for both artist and audience, is rewarded.

And as the title would suggest, Part IV: And Drift Away is a slow course through sterile, icy progressions. The swirling tin elements are deceptively cathartic; there's a calm within these bursts of chaos before the ultimate doom-metal implosion/ejection. The massive, crushing malevolence is, in its most extreme form, also a sort of acceptance. Everything this album has thus far built and offered is being unrelentingly dismantled, and this crusty death-blow is a numbingly profound coup de grâce.

As you've likely noted, Chapter II strings together its track titles to form "As we surrender to lust and the pleasure of pain, we can descend into the unknown and drift away." That's a bold statement, and an even bolder concept. But the sounds actually stick to the idea even better than the titles. The Canyon Observer will draw you in and chip away at everything familiar. When you're struck by their ability to effectively change the course of your thoughts, you begin to fully sense that they're in control. You've been set out to sea and left with little more than blind faith. But hey... when that's all you've got, you'd better hold tight.