New Band To Burn One To: ORTEGA 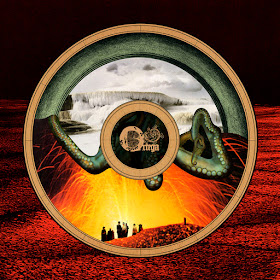 Ortega is a four-piece sludge/doom collective from the north of The Netherlands. Four men tell a tale of the sea which is told in a broad and visual manner. the sound is best described as dark metal balanced with soundscapes and slow, heavy riffs. Formed in 2007, the band recorded their debut album ‘1634’ in 2009 after a series of gigs, which they eventually released it in January 2010. 1634 was recorded and mixed by JB van der Wal (Herder, Aborted), who is also known for his work as a producer for Dr. Doom, Greyline, Grinding Halt and Suffering Quota. 1634 was released as a concept album and received many great reviews. The CD was distributed online and sold at concerts, packaged in a limited handmade cover. In 2011 they re-released the album on cassette. Aesthetic Death re-released 1634 in 2012 as a deluxe black on black digipack with uv spot varnish, 8-page booklet and renewed artwork. The band went back into the studio in 2011, again with JB van der Wal, to record their follow-up EP, A Flame Never Rises On Its Own, which was released by Badger Records in 2012. In 2012 They went to the studios yet again to record another EP,The Serpent Stirs; their longest output so far, clocking over 18 minutes of psychedelic doom. This release is set for nov/dec 2012 to be released as a limited cassette by Tartarus Records.

"Today's band is merely one you need to hear rather than one to burn one to. This band from the Netherlands brings forth what could be called epic Ocean Doom. The music at one moment sounds like a ship drifting on calm waters then suddenly gets overcome by huge crashing waves caused by a drenching storm and blasts into the ship over and over. Once the devastation commences, the calm waters prevail and you are then guided into the peaceful darkness of the night. The music is carried by cannon-like drumming, a huge wall of sound and throat-shredding vocals. After high acclaim of "A Flame Never Rises On It's Own", the band has just released the 18-plus minute epic "The Serpent Stirs". Go to their Bandcamp page to listen to it now!"

To help others enjoy this awesome band, please leave a comment as to whom you think this band "sounds like" or may be "for fans of". Thanks!