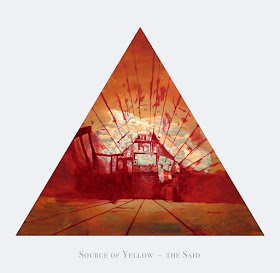 This is an interesting new band from Brooklyn, NY. It’s hard to describe what genre they fall in to. There is a free jazz ideology to their music, but this isn’t traditional jazz, nor is it rock and roll. They are a trio combining guitars, drums, horns and psychedelic sound effects, much like the sounds you’d hear from acid jazz bands like Groove Collective or Jaga Jazzist. It’s an interesting mesh of styles and beats and a different approach to songwriting from the typical singer-songwriter led bands. Every member plays an equal role in the creative process and there is the element of the accident playing an important part. That’s where the free jazz idea comes from. These are not pre-written compositions that will sound exactly the same every show. Source of Yellow sound like a band that’s heavily influenced by jazz and rock, but combine to the result very different from progressive rock bands known for mixing the two. They’re not like Phish and they’re not like King Crimson or Yes, but rather similar to a band like Tortoise. Not only do they have their own sound, but they are also spreading the ideas of jazz and whatever else this band listens to.

The title track- “The Said” is closest to a rock song following any kind of normal writing formula, opening with post-rock guitar riffs over loud tribal drumming. The vocals are somewhat hidden in the mix, making the music more psychedelic than it already is. I like how the drummer leans more towards classical percussion rhythms, like a guy beating on a timpani with a beater, instead of a standard drum set up.

“1 & 9” rings acoustic chords in a vivid way, like storm weather in music form. Now the vocals are clearer, and the music flows like some of those old british folk records of the 60’s/70’s (e.g. Nick Drake, Bert Jansch, Tim Buckley). The band sounds like they’re in a metronomic trance to the hit of a tambourine on two and four.

“Maybe” begins with ambient effects you’d hear in a horror film, or a Fripp and Eno record. It’s hard to tell how they’re making these sounds, if they’re synths or sampled backing tracks, but it works. The aura is set like the atmospheric moods Miles Davis explored during the Bitches Brew period. Flutes and abstract vocals buzz around the bass and drums.

Between these three tracks, Source of Yellow provide a variety of musical flavors, along with the facility of schooled musicians. They’re like a jazz band gone wrong, and I mean that as a compliment. They share the same ethos as Tortoise, except Source of Yellow is even more obscure. It’s always inspiring to find new bands like this. It lets us know everything hasn’t been done before, and there is new ground to cover, as long as the musicians are connecting and channeling energy in a stimulating way.

The members of Source of Yellow are: