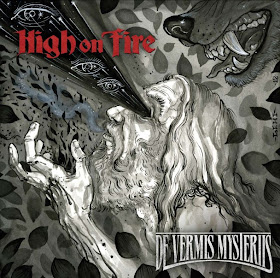 From the plains of the deepest hash-induced journey to the unseen, to the unsightly poison of ancient and forbidden battlefields, the band treading deepest into the true guts of hazy mind-wrenching sludgei-ness since the late 90s, High on fire returned this year with followup to their stunning 2010 affair Snakes For the Divine. The record that rose from the ashes of the people crippled by the afformentioned riff-fest was built for those not pleased with its predecessor's cleaner production. De Vermis Mysteriis, is the newest effort in HoF's warpath of barrel chested riff affairs. Sporting a titular reference to H.P Lovecraft, and a back story regarding Jesus' hypothetical twin brother / time travel, as well as production values courtesy of metal juggernaut Kurt Ballou- this record takes on more of Blessed Black Wings' territory with ferocious uptempo monstrosities and a bare bass heavy production style. And it's freaking LOUD. I know. I blasted it out my 600w PA system in my old apartment complex. Needless to say I'm no longer allowed residence there ... Thats what I call METAL!

1. "Serums of Liao" - Right off the bat with the Lovecraft references, the album opens on a twisting surreal tirade of classic HoF riffs and battering-ram status drums. The vicious throbbing verse riffs are adorned by a major sounding chorus with Matt Pike roaring out deranged throaty beastliness all the way through. A quick triplet feel dominates the tune. Spicy!

2. "Bloody Knuckles" - This is the track bleeds upfront with spaced out well placed burning before launching into the fury that evokes some of the energy captured on Snakes. It's dirty, it's mean sounding, and its percussive. The song romps on before getting to a frantic-solo. Than comes the thrash, the band is showing their Slaytanic colors here- and it's damn good - Des Kensel's drums are tight as the anus of a pissed off monkey. Brutality!

3."Fertile Green" - The first sigle released. Tribal war drums herald the of pillaging your town, your home, and your females. Than it gets angry - pounding out snare hits on all 4 beats hardcore style with swirling cavities where the lyrics reside. The most violent tribute to the pot plant you've heard in a long while- this one pounds out before coming to an anthemic pulsing bridge instructing the sacred rituals of cannabis to commence. It continues with aggressive thrash style rhythms until the end.


4. "Madness of An Architect"- A lurking doom tribulation - this one evokes the really early stuff with lo-fi guitar squeeling to summon the beast from under Pike's nails. Remember The Art of Self-Defense? So do I and so do they. This one screams till the end with slow pungent exercises that are sure to keep that head bobbing in place.


5. "Samsara"- The oddball instrumental. A bit of wailing with help from Kurt. Fun, short and intriguing but it's on the filler end of things compared to the instrumentals we were handed on Death is this Communion.


6. "Spiritual Rites" - Deathy and assertive - This one compares to other pounding HoF tunes. Quick and terrifying - tremolo picked lines are this song. One of the faster tunes on the record, definitely for you Slayer fans reading.


7. "King of Days" - This is where i'm biased. MY FAVORITE TUNE on this record. Matt's terrifying melodic vocals fit in perfectly over a destructive and bewildering doom riff. Hallowing howls and reverb'd guitars act as hooks in-between lines and evoke the death march. The Chorus uses tense low end to round it out and interspliced easily-hummed guitar lines hit before going back into the main riff. This tune features a ferocious bass solo from Jeff Matz by the end before roaring into a tribal harmonized guitar finale. A meteoric and awesome display of the band's songwriting prowess- evoking the likes of "Bastard Samurai" and "10,000 years."


8."De Vermis Mysteriis" - The namesake and another more focused sludge tune. This one is another where Des shines and just pours syncopated tribal drumbeats over everything. Pay close attention to the rhythmic exchanges between instrumentalists in this one.


9. "Romulus and Remus"- A hefty war elephant. A poisonous riff fills this tune with Rome's founding referenced lyrically - also sporting one of Matt's more melodic and well-phrased solos. He experiments with his toggle switch as well as his general Iommi-inspired wailing and keeps the pace of the solo till the end.


10."Warhorn" - A stark depiction of the Civil war complete with dissonatant haunting wallops to the mouth. This one experiments with more space as Pike plays sparsely through choruses. Still writhing with slow almost bongzilla-inspired clout, HoF trudges out with a clean and slow ending.


This album is a mixed bag. It's got that same vivacious production quality we've seen them gravitate towards in the past as well as some new tricks. It approaches sludgier territory with some of the tracks, fast paced, whirring, and jarring tunes that just mess with your senses. Personally I love the more doom influenced tracks, but this band definitely has something for everyone. Damn shame they were out of commission do to rehabilitation this summer- but i'm sure the minute Pike gets out, some serious face-ripping will occur.

Instruction Manual for the Apocalypse? Possibly