New Band to Burn One To: COOGAN'S BLUFF 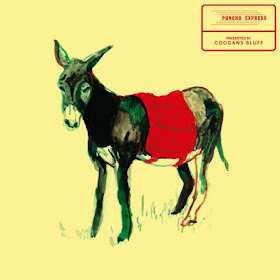 Since 2003, Coogan's Bluff (named after an old Eastwood movie from 1968) have been celebrating their musical journey through time and space.  Sonically it's an amalgam of what happened during the late-60s and early 70s, paired and seasoned with Stoner rock influences and epic instrumental parts, with catchy hooks and funky wind section. Since recording "CB RADIO" (2007) and MAGIC BUBBLES (2011) the band has leaped forward with "PONCHO EXPRESS" (2012),
Attemwere made in the two predecessor albums to describe the music produced. Concepts such as "natural-heavy-kickass-blues-rock & roll-krautrock" , were espoused, but a couple more dashes may be necessary this time around. The stops are pulled out the trend police must wait outside. It may be simply about the superlative of genre names: ROCK. Ornate, decorated, stamped, sprayed in big letters.
Paschen Charlie (drums), Willi Paschen (guitar), Clemens Marasus (bass) and Thilo Streubel (vocals) have been more than a decade, Coogan's Bluff. Thilo had to take a baby break, however, a tempting offer to play on the on Duna Jam festival in Sardinia, encouraged the band to press on and rebuild  with Stefan MeinKing (trombone) and Max Thum (saxophone) as a way to mask a lack of vocals. Both had been on  present "MAGIC BUBBLES." The new album however, featured no instrumentals as bassist Clemens grabbed the mic and what spewed forth oozed Captain Beefheart, Tom Waits and a Jimmmy Castor with its extremely heavy all encompassing 70s-radio mashup.

In just two days, "PONCHO EXPRESS," was recorded live and analog (what else) was mixed by Charlie himself. This is where the 70s-90s meld, with a  TÜV seal from the here and now. The record evokes UFO, Golden Earring, The Stooges, and Can, but also channels Pearl Jam, Big Chief, and Monster Magnet. With an organic and authentic vibe, raucous riffs, crafty catchy melody, catchy hooks, and funky grooves, the album gives way to both dancing and head-banging. The donkey is saddled ... take a ride.

Thoughts:
"Coogan's bluff are a freaky group. Drawing from krautrock influences to oldschool blues and funk, the band screams Beefheart, Zappa, and early King Crimson all at the same time.They also channel sick 90s-style Monster Magnet tinged riffage and tune in and out on this wild tripped out Desert-Western vibe. This record has something for everyone and is definitely for anyone looking for a DIFFERENT kind of rock record. Kudos to the group for knowing their stuff when it comes to early 70s prog and space rock - a retro-tinged masterpiece. Dig it!"