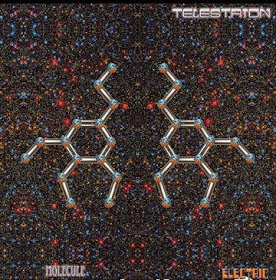 Telestrion is a space rock band from Atlanta, GA who are about to release a new EP called- “Molecule”. It’s sci-fi rock, sorta like The Flaming Lips meet The Mars Volta without the prog element. I prefer it that way. I always thought if The Mars Volta were more song oriented, less wanking, I’d like their music more. And The Flaming Lips are always artistically gratifying, even without the schticks you see at their shows. If you add in Ozzy’s snarl, the lyrical charm of Marc Bolan and a load of Matt Cameron drum fills, you’ll get a sense of what to expect from Telestrion.

This is definitely a band of dudes with serious record collections and heavy duty guitar pedals. Underneath their science fiction lyrics about ‘Neon Spaceships’, there’s an implied party-rock vibe, like Kiss or T Rex. It takes balls-out honesty to end a lyrical phrase with ‘let’s get high’, as they do in the opening title-track. It’s a majestic opener with trippy synth leads flying over sporadic drum fills, as if this was planned to sound like a return to the classic rock records of the 1970’s. You will hear a lot of guitar solos and a lesson on every which way to use the wah wah. Their heart’s in the right place, as they retain their punk rock ethos inside perfectly crafted song structures. The musicianship is impressive to say the least, particularly those guitar solos. Billy Corgan would be proud. This must be one hell of an impressive band to see live, like the best of all your favorite rock bands of the past four decades.

“Tunnel in the Sky” keeps the EP at an exciting pace with some groovy percussion and futuristic sound effects, an instrumental track coming after a rock anthem, which is telling for a band. It means they’re not trying to fit in to any single mold and that they are doing what they want, making the records they want to make. Too many bands these days focus on one particular sound as a selling point, eventually getting pigeon-holed with any success they might achieve. Some might argue that point, conversely calling-out Telestrion for being self-indulgent. Why not? We need more self-indulgence in current rock bands, especially when the players are as talented as this. And what would make this EP any more awesome than it already is? A pitch-perfect cover version of “A National Acrobat” as thick as Black Sabbath ever played it. They nail it, not only performance-wise, but the production as well. It’s almost identical to the original, down to the drum effect. My guess, is they went to a studio with various sorts of analog gear and a top-notch engineer working the board. You gotta love a band that plays Sabbath exactly like Sabbath.

“Slightly Sideways” continues where “Tunnel in the Sky” left off, another instrumental track with dueling guitar experimentation and congas similar to Sabotage-era Sabbath. I keep thinking of the second half of “Symptom of the Universe”. (Some guitar pedal company should really endorse this band)

“Time and Space” is the production of Pink Floyd’s “Us and Them”, but explosive in dynamics. Ascending, uplifting guitar riffs give way to hymn-like choruses. The vocals are spot on Pink Floyd harmonies, as intentional as their Sabbath cover. I love how they sneak into these Floyd sections, for a verse or just a part, then the lead singer’s back to that nasally Ozzy snarl. I never imagined a band could blend Sabbath and Floyd so well together.

Closing this EP, is “The Sacred Relics”, diving into Sonic Youth territory. Throughout the record, the band already proves to be highly skilled musicians, why not lose your mind and go wild on the final track? It’s a free for all double dose of guitar ambience entrancing the listener into forgetting how the whole thing started. One minute you’re listening to a singalong rock record, next you’re enclosed in the psychedelic realm of the no-wave guitarists of the 70’s.

All in all, Telestrion wear their influences on their sleeves, proudly. It’s like a history lesson of rock and roll in a 30 minute EP. I assume the vinyl sounds amazing, considering how well it’s produced. And the band has also announced a re-issue of their full length self-titled LP on vinyl, featuring a 13 minute epic- “Lost in the Sky” with the most ripping guitar solos, fantastic harmonies, reminds me of something off STP’s “Tiny Music”, but jazzier. And just like their Sabbath cover, they NAIL “Astronomy Domine” with perfection. I usually enjoy when bands make their own impression of a song, but if you’re not gonna do it different, do it right. So far, Telestrion is on their way up, a band that can do no wrong, as long as they stay true to their influences and continue onward with the spirit of good old fashioned rock and roll.

The members of Telestrion are: 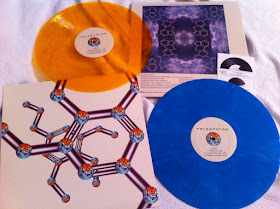