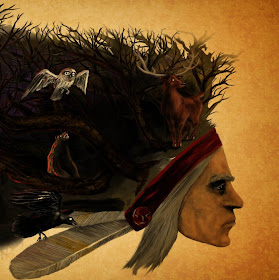 From the host country of the 2012 European Soccer Championships and the land of twenty million beautiful women comes the dynamic, talented trio of rock artists that form the splendid band Stoned Jesus, led by the artistry,  dexterity, drive, and vision of Igor Sidorenko. Joined by his bandmates Sergey Olegovich on bass and Vadim Matyko on drums, they have travelled down a familiar and well worn road, one that consists of line-up changes, gigs at small venues throughout Eastern Europe and Russia, honing their craft in front of discerning, veteran fans, and releasing an occasional EP or LP when circumstance and chance collide, in hopes the incredible craft and art ingrained into those releases somehow creates a spark of intrigue and interest that expands into a groundswell of popularity. All this while loving what they do, playing what they love, and rocking what they play for those veteran, discerning fans who are fortunate to experience rock in one of its purest forms from one of its many gifted practitioners.

Stoned Jesus play an artistic, spiritual brand of Stoner/Psychedelica on their latest release “Seven Thunders Roar”, incorporating all the important elements of low and slow, doom and distortion, fuzz and fury, while also winding through compelling sections of extended psychedelic excursions of spiritual revelation. To craft such exquisite rock renditions that combines the best of two distinct and highly enjoyable styles denotes a grand drive and determination blended perfectly with high craft and artistic deftness. Igor has delivered to his audience an opportunity to experience rock on the favorable canvas of both familiarity and novelty, incorporating favored stoner/doom sounds played with vigor and heart that crash against boundaries that were long ago established for volume, richness, and texture, but deftly integrated with freshly carved slices of guitar virtuosity, intoxicating in varying degrees of tempo, throbbing in intensity, and utterly intriguing in discovery as it unfolds through many layers and intertwining rhythms, virtually hooking you with fantastic, thrilling, and melodic pieces.

The music encountered on “Seven Thunders Roar” is a veritable treasure trove of discovery. The songs are long and meaty, ranging in time from the runt of the collection, “Indian”, clocking in at 1 second under 5 minutes, to 1 second over 16 minutes for “I’m the Mountain”. All of the songs have a hearty, beefy guitar that melds perfectly with an airier, more nimble accompaniment, both riding on top of vigorous, toe-tapping traps and thunderous bass, pulsing with fury, life, and pleasure. Stoned Jesus add more to the songs than simple stripped down instrumentation by each member, with wah-wahs here, quick and sweet little riffs there, little easter eggs of entertainment nestled throughout the tracks, coming out of the forest only upon the familiarity of multiple playings.

“Bright Like the Morning” has a ballad-like aura, with a beautiful and slow unfolding that sets the tone for melancholy and remorse, pain and despair, while Igor  “Pilgrim have you lost your way” in a clear and satisfying rock and roll voice as distinct and familiar as the music behind it. The song slowly builds, adding energy and urgency, letting in light and hope before reaching its crescendo in the chorus where the vocals match perfectly with the rhythm of the guitar licks playing an almost classic chord progression that is simple and clean, satisfying in delivery. Once the song delivers you to the top it never crashes down again, remaining within a pure, unadulterated deluge of sound and fury, continually adding to the mixture blistering solos from Igor and bad ass bass chords from Sergey, driven by the urgency of Vadim’s dexterous, athletic mastery of wood on skin.

The intro to “Electric Mistress” saunters  like a mama grizzly, growling in a low, slow rumble, a prelude for what is about to come for those that linger, which of course we do, because we welcome what the bear can wreak. The rumble gives way to a lone primal roar, ferocious and vibrant, with sawblade teeth, blending into an electrifyingly agile maneuver of catchy time signatures driven by insistent tattoos and bruising bass notes. At about the two-thirds mark the song takes an unexpected segue into Lectric Slow Down, the instruments all dropping intriguingly low, tantalzingly slow, pulling you intstantly into deep distortion and weirdness, a slo mo playback feel grinding through until one final outburst to normal rock time.

“Indian” is another engrossing and fun rock and roll undertaking in a similar vein to its predecessor. Igor’s vocals are full of heart and clarity, making a case for the wrongs wrought upon the Native Americans of North America by the white man, forcing his unconquerable spirit toward the path of war. Stoned Jesus hold nothing back as they work their magic throughout the ditty, playing various riffs and pieces that blend perfectly with the main verse and chorus. The song is just as adventurous in nature as “Electric Mistress”, upbeat and catchy, drawing you in with its adept execution of stoner instrumentation. It even has a slow down egress two thirds into the song, and although this artistic segue had just been successfully attempted on the previous track, it works here as well.

Things change up for “I’m the Mountain”, beginning with a nice ballad arrangement of acoustic guitar and crisp vocals laying out tune and melody of introspection and self searching, leading toward a fate of despair and desperation for the teller of the tale. The build up from this point is gradual, incremental in instrumentation and power, slowly, inexorably wending its way up and around twists and turns that tell a tale of anguish and woe before turning a corner and discovering a small ray of light that opens things up for little optimistic riffs blending on top of the melancholy undertones. Optimism builds until a mantra is formed . . . “I’m the Mountain, rising high. It’s the way that I survived.” Enthusiasm and encouragement build from this point, running to leave melancholia behind, but never truly escaping. The music played throughout this track does a masterful job of interpreting the lyrics, with variegated layers of exquisite instrumentation that constantly add to the sound and the story, gradually telling a tale that grows in complexity and richness, delivering the listener in the end safe and sound to the top of the mountain.

A lone, fuzzy riff sets the tone for “Stormy Monday”, joined in short order by the entire kith and kin of low, slow fuzz and melancholy, the signature sound for this closing track of eight monstrous minutes of stoner bliss. Stoned Jesus work their magic to perfection on this song, adding snippets of guitar here, harmony vocals there, building in power and volume, inexorably rising to an apex of imperial rapture.

Stoned Jesus are obviously committed to making music they enjoy, music with an edge and with artistic flare, and with a whole lot of heart and talent. They have designs already on two more albums, possibly to be released in the coming year, which speaks to their work rate and enjoyment of what they do. In the meantime we are treated to a truly superb album in "Seven Thunders Roar". Is this band destined for bigger and better things? They certainly have a few things in their favor when you consider their love for what they do, their ability to craft unique and interesting songs that blend hard driving stoner sound with loftier psychedelic overtures, and their work ethic, producing quality new music at timely intervals.