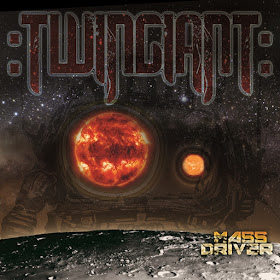 Put down the Bloody Mary mix, you're embarrassing yourself. Your head's buzzing because you overdid your Saturday night, grabbed a stranger's ass, and got punched in the jaw by her hawk-eyed boyfriend. There's no cure for today's hangover, so the only thing you can do is immerse yourself in raw, fuzzy Sunday Sludge.  Alternate cold- and warm-compresses on that shiner and fill your head with TWiNGiANT's self-produced, full-length debut, Mass Driver.

With an undeniably gigantic sound that buzzes from start to finish, Mass Driver is nine thick wedges of blazing, fur-coated stoner-sludge.  Varying tempos and adept instrumental marriages characterize countless bands' sounds.  But when the result is this chewy and delicious, listeners tune out all else and lose themselves in filthy, heady jams alive with sprawling moss and ham-radio static.

Hanging, drone-y guitar aches are accompanied by drum-tap whispers on the ominous, sort-of-introductory Abduction.  Spacey and a bit spooky, this opener lays a fuzz foundation that's steady to the album's final breaths on the title track.  Abduction's drums enter a somber march, a sort of Taps-ish patience under the hovering hum.  Awake in the Hull clouds every occupancy, peppering lo-fi sludge with repeated guitar jabs.  Fuzzy stoner grooves break up the mire, but no sticky net could contain the atmosphere on these licks. TWiNGiANT's brilliance is already looming.

Crunchy and thrown-back is the sinuous furrow of Burning Through. Whirring like an electric fence, the track's robot-sludge is hardly stiff.  Wild-current riffs soar in every direction without letting the rhythms cake their boots and weigh 'em down.  A stoner ribbon is spun and threaded through Eat the Alien, a steady drift through the fog of someone else's headspace.  Jarrod's vocals wrap your mind like a heat blanket, and the electrical storm-jam enters a breakneck pace that doesn't care whether or not you keep up.

The proficient guitar-tandem formed by Dave and Nikos is never more ambitious than on the rapid shifts of Adrift in Space.  How they manage to keep up with each other is only nearly as impressive as how they manage to contain the fuzz.  The sludge-stomp is still there, though its difficult to detect under the intermittent licks.  The track chokes and gives way to the immediately scattered, ultimately settled Concrete Home.  The abstract heaviness is never too abrasive, and dominance is easily established by the sludge-doom pendulum swings.  TWiNGiANT waiver and wallow, remaining filthy and sticky underneath flaming guitar projectiles before sputtering out.

The patient, lengthy bracket of H.I.S.M. and Pale Blue Dot highlight the band's greatest elements.  Each ticking beyond six minutes, the tracks form the heart of the album and provide listeners with more than a little dust to choke on.  Jeff's drums are monstrous on H.I.S.M., a stomping and grinding jam that ramps the riffage and burns that good burn, if you know what I mean. Guitars splinter and separate themselves, while Jarrod's vocals attack the song's quicksand.  You might just wonder if a Woolly Mammoth is making its way through your living room.  As for Pale Blue Dot, the slow pluck is a lonely roll through a dense, mossy garden.  Thick and deliberate, TWiNGiANT break away from their Sabbath-influence (and vocals echo Melvins) as guitar shrapnel rips at your skin.  The midpoint singalong enters a corridor, marching in-step between moons.  This is your intergalactic Sunday Stoner-Sludge.

The aforementioned title-track closes the disc with plenty to gnaw on.  Crusty and substantial, especially for a closer/outro of sorts, there's a buzz interruption that'll fool you.  Jeff's drums are primal, Chris Warmuth's bass is beautifully low and loose, and those sailing and soaring guitars exercise unexpected restraint and allow for some long-needed easy breaths (whether you knew you needed them or not).

There's no appetizer needed here.  From the onset, TWiNGiANT's debut is rife with girth, gravity, and goddamn electricity.  Your head's gonna rattle and your ears are gonna buzz, so maybe you should warn your neighbors.  Or you may have to say screw your city's noise ordinance and just pay the damn ticket.  Every track on Mass Driver is gargantuan and well-constructed, and every listen is gonna beg new questions.  Luckily, however, every screening will reveal new a new truth: TWiNGiANT will knock your ass flat.