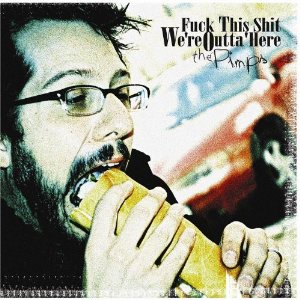 I'm not sure I'm ready to take shots at the music industry.  Sure, the industry allows nine songs to rotate ad nauseam, finds the pretty men to make up for a lack of skill, and ignored artists like Nick Drake, Daniel Johnston, and the entire country of Poland.  I'll admit to ignorance on the ins-and-outs of how contracts and tours and royalties operate.  I couldn't even spend five minutes playing guitar without letting the most uncomfortable of blue-jean boners convince me I should spend my time scammin' squirrel.  All I do is listen, analyze, and spread the pollen.  But criticizing the dickheads in charge just ain't my place.

Some of you "Coast-ers" may not realize this, but it takes a heavy dose of sarcasm chased with burning, jaded disenchantment to tolerate living in America's Heartland.  When the Good Year Pimps faced legal action from, uh... Goodyear, they became The Pimps.  Since 1994, this Rockford, Illinois quintet has maintained a stable lineup and fed listeners a steady diet of witty, lightning-quick tunes that dismiss labels and defy categorization.  The band's latest toss, Fuck This Shit We're Outta Here, is a thirteen-track middle finger to a cafeteria's cool table, though the comedic veil will have those very same collar-poppers nodding in rhythm with the fat fuckin' larper who actually gets it.

The entire band tuck their tongues firmly into their cheeks, a fact evident from the onset with We Were Too Drunk To Be On The Roof Anyway, a gentle and chiming lullaby that almost parallels Elliott Smith's somber coos.  The stop-start tempo of Gun Says "Yes" is more radio-friendly than they'd like, complete with the whisper-to-a-scream that Frank Black turned into a career (luckily, The Pimps do it without any pretense).  Choppy and catchy, Stu's gruff delivery juxtaposes the hums and pauses and it's impossible to predict where this record might take us.

The band's versatility permeates the record's frame, from the percussive simplicity (and mastery) of Suckcess (the band seems wired to deliver industry-criticism, but it's never thankless or without merit) to the tippy-tap self-loathing of These Are The Things I Know I Know. A quick bass stumble through all the insecurities most people ignore is exactly what makes this sound so refreshing.  Staying thick through the breaks, audiences will have a hard-time finding something they can't identify with.

Dames at the Soiree is sheer harem-whore goodness until Stu enters all Southern-and-shit.  The track bounces and buzzes with the excitement of a fifteen year-old virgin who's had a few wine-coolers.  The dixie roll of A Good Mechanic Is Hard To Find, however, is thicker and dustier.  You'll hear echoes of Ween's 12 Golden Country Greats, but there's no mocking; these dudes understand and embrace their hill-rod influence and fan-base.

And let's talk about that lurid country embrace.  A westward trot is ribboned throughout the album; steady drum whisks, bass thumbings, and snickering guitar characterize Now Michael, It's Just T.V., as The Pimps attack media and religion.  I.M. 'Merica, on the other hand, is a brilliant Southern Comfort hymn loaded with a twang that can't steal the lyrics' thunder.  And who doesn't love a sideways stab at Nickelback (actually, it's blatant).

Break it down, and The Pimps have always been a snotty punk band.  They'll wipe their asses with your expectations, your judgments, and your scoffs. From the anthemic, Jello Biafra-vocal of Temporal Lobe Epilepsy & Delusions of God to the closing title track, the punk sneer relents only long enough for listeners to stop choking on their chuckle.  A telecaster laced through thick rhythms is choppy and stuttered until A Lotta People Say A Lotta Things About Hawaii pays homage (maybe) to Wild Cherry.  But the message is consistently critical of stupidity.

The Pimps do as much with their pauses as they do with their verse-chorus-verse.  Confidence shines in the form of self-deprecation, and listeners just know they'd be able to back up every word if they were tested.  Burning through as much substance as style, there aren't many bands who can pull this off without sounding either pretentious or derisive.  The Pimps clearly know what their doing, whether they want you to know it or not.  That blue collar sure gets some stink on it, but its honest, free of frills, and pretty inviting.