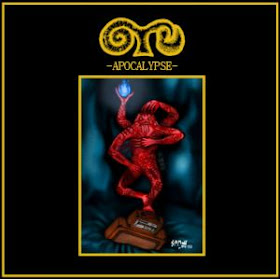 Many aspiring musicians never make it past their parents' basements. I picked up a guitar when I was fourteen, thought it would be much easier to play than it really was, and ultimately decided I could sell the damn thing for beer money. I had no discipline or patience, so when I trip over solo albums from one-man bands, I do tend to get a bit awestruck. When such an artist crafts such an album in the span of one week, I frown at my own lack of ambition.

Helsinki, Finland's Otu is Olli Suurmunne, a seemingly generous and easily-accessible musician who cut his teeth performing in Altar of Betelgeuze, a heavy doom/drone three-piece, and the stoner/blues act Stream of Sorrow. Under his Otu mask, Olli has given us Apocalypse, a ten-track album packed with sludge, doom and drone. Throughout the album, you hear the Orange Tiny Terror amp, you detect numerous pioneering influences, and you feel it all trickling down your throat like thick Codeine syrup.

The album's Intro promises two things: drone and fuzz. The underlying reverb is otherworldly and ominous until the crunchy sludge of Promise arrives, wielding a stoner vibe buried in thick mire. Slow, steady, and electric as a toaster in a bathtub, the buzz marries Otu's throaty sneer to pin your shoulders to your seat. The mossy quasi-solos never let the gravel fully settle, though things grow pretty thick as the track progresses.

The stoner fuzz wrapped around each track never detracts from the filthy crunch. Ain't Got No Frowns On Me maintains a tight fog amongst its Badmotorfinger influence. The blistering, uptempo burn through rough terrain makes you wish Otu extended the jam, but the balance of the album tells you he knows exactly what he's doing. The bong-choked Hell Breaks Loose follows, rolling downhill and melting everything in sight. Otu's vocals here are his most intense and demanding, staying deep within the crust rather than sailing above it.

That drone promised on the album's opener is delivered on Cemetery Part I and Cemetery Part II. The immediate doom of Part I fades in favor of Sunn O))) patience. It's difficult for musicians to be this tranquil with themselves, but Otu delivers a slow, thunderous, and macabre purr with no struggle. Part II closes the album, crustier and only a tad faster than its predecessor. Despondent and cloudy, there's somehow a strange comfort that envelopes listeners and rubs away dead skin with a sandpaper malaise.

The album is peppered with such varying styles that it's difficult to categorize it as sludge. On Sick, listeners meet Otu's cool, breezy response to the album's napalm. A choppy stop/start dynamic bounces off bayou elements that layer upon themselves. Carried out by Woody Weatherman-esque guitar licks, there's a southern-sludge atmosphere that makes this track stand out.

But the sludge on the album's title track is of the more nightmarish variety. Churning, chugging rhythms underly Otu's vocals that enter as quickly as they leave. The two-ton plod of lumbering giants could destroy entire villages, yet somehow the rhythms shift and a melody is lightly detectable. The song's timing is perfect while the riffs and breaks are well-placed and fully-realized. Ultimately, the tempo slows, as if cymbals are cautiously pulling away from your blistered face.

The whole of Apocalypse rattles in your head, sets up camp, and tickles your pre-frontal lobe. Angry and thick as hell, the entire album rides like a dune buggy on gravel. Otu digs in his hooves and, all by himself, manages to construct an all-around ferocious and thick sludge metal record that breaks free from his influences without abandoning them. The drone, doom, stoner, and even speed-metal fused throughout the disc only add to its appeal, and listeners won't ignore this one. Stoner sludge is alive and well... in Finland.