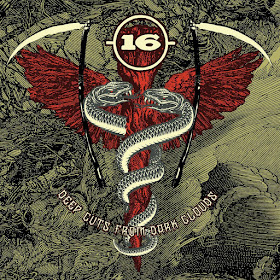 Many find April's tail-end to the be one of the year's most optimistic times. I won't say chirping birds and the smell of fresh-cut grass should replace the tic that results from missing your weekly Sunday Sludge, but a little sunshine could make anyone's day a bit more tolerable. Couldn't it? And aren't Los Angeles forecasts generally packed with bright days?

After two decades of misanthropic, drug-addled growls and hums, sludge veterans -(16)- are done believing there's a light at tunnel's end. April 24th marks the release of Deep Cuts From Dark Clouds, the band's latest in a string of straight-forward, burned-fingertip efforts that have left listeners picking their scabs and ignoring interventions. On these ten tracks, however, -(16)- have gone belly up and crafted the finest filth of their decorated existence.

Opening with Theme from "Pillpopper" now seems the only logical course for this album. Grinding and abrasive as the band has ever sounded, the trademark groove lies just beneath the sludge blisters and Mateo Pinkerton's savage drum assault. -(16)- choke on self-loathing, but they never overindulge and they never bore. If you're not accustomed to these emotional sewers, burglarize your nearest pharmacy for some supplies.

Ever-choleric, it's impressive the band can still sway its hips. The fuzzy shrapnel of Parasite shares space with awesome movement. Slowing to a slugfest between starving vagrants, this one churns better than an empty stomach greeted with cheap vodka. The Sad Clown is quick and pained, intermittent with pause and choppy licks. Jerue's vocals here are his deepest and most plagued, at times nearly drowning in piss-stained carpet fibers. But that groove holds him by the collar and exercises the restraint he suppresses.

Teasing with a near-hopeful fade-in, Her Little "Accident" oozes open jealousy. Tony Baumeister's bass is more a provocation than an invite, and -(16)- don't waste time peeking in your window; they off-road straight into your living room as you casually laugh at your own sins. Baumeister's low-end on Ants In My Bloodstream holds rhythms sunken and moods paranoid as Bobby Ferry's distant licks keep your dick-hair on its end. Escalating toward "never ending self-destruction," the track peels back folded skin, never allowing listeners any level of quiet or luxury.

An ominous haunt on Broom Pusher captures the brooding of a lowlife tip-toeing a misty back alley. Guitars go for a ride until Opium Hook's classic sludge tempo. This dirty, lumbering cut splinters and results in the album's fastest tempo. As Jerue notices "The sun is going down, we're in trouble," you worry he's absolutely right. And as Bowels of a Baby Killer descends on your speakers, you've gone too far to turn back. Spooky and cold at first, the track progresses to a bridge you consider jumping from. Following a mossy break, dirge enters and we drown in confusion and torment. Ultimately, though, complacency permeates and emerges the victor.

The disc's closing tandem is where isolation and despair return with a heady grind. Steady is the drone on Beyond Fixable, a song surprisingly focused for documenting the acceptance of addiction. Ferry's fretwork wrestles with Baumeister's thumbings, and the subject's ugliness nails its mark. Only Photographs Remain is monstrous with riffage, but Jerue's sting pushes the development of multiple personalities. Time signatures mutate, tempos shift, and insanity is ever-embraced. But hey, this is -(16)- after all.

Never known for mincing words or avoiding unnerving themes, Cris Jerue and company stick tight to elements far too real and painful for many to even acknowledge. Drug addiction and mental illness have all but defined the lyrical content strung through the band's catalog like stitches through broken skin. But here, Jerue's bark is more symptomatic of choice than struggle. The only match for this is the low and vile whir of rhythm that's never out of death's reach. Without tricks and without fluff, -(16)- tread the broken ground abandoned by their contemporaries. Ubiquitous pain has evolved into flared indignation, and the resulting sound is -(16)- at their greasy pinnacle.