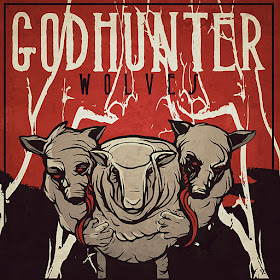 It's nearly impossible to get lost in the woods anymore. I'd think no matter how far you wandered, you'd be able to catch the hum of an engine or stretch your neck to find a distant porch light. But if you're worried you won't make it home in time for dinner, lock yourself in a closet and crank Godhunter's Wolves. The layered, haunting sludge holds more than enough unease to pin you down and bloody your lip.

Maintaining gradual silt build-up is Wolves of the North. Marching militantly behind dual-vocal shouts, the caked sludge thickens, grows deeper, and nearly breaks under the weight of its own sonic shifts. These wolves sound like they're getting closer with each passing beat, though the attack also seems to be coming from every direction. You're left no choice but to embrace the madness.

Powerbelly is a fuzzy, pensive, progressive burn without even a hint of subtlety. You'll never quite get your footing on this dense roll that sticks low to the leaves. Godhunter slow to a squirm after days of dense repetition, but you'd better have a good explanation for all those pulsating bruises. No cop is ever gonna believe you fell down the stairs last night.

Revving the motor and crunching dry bone come effortlessly for the album's closer, (Dead Hooker by the side of) The Road. Peel back the skin and find Matthew Davis hanging hope at the clearing. The keyboards balance the Phil Anselmo influence through more than a few tempo shifts. Slowing to a soldier's cadence, the stomp of Spyro's drums and the stutter of Dick's bass take a moment to grab your greasy collar and shout in your face. The song (and the album) walks off and doesn't turn back to see the rubble.

This band is hunting more than God. I'm not sure what's happening out in the Arizona desert, but Godhunter have hit their stride and found their teeth. Wolves, for all its defamation, showcases the promise of sludge giants shedding their skin. This chilling collection is a statement of heavy, jaw-jacked sound and the itching of eager ears should relent with the first note. Leave a trail of breadcrumbs and keep an eye on the falling sun. Wolves WILL leave you with no compass, be it magnetic or moral.