As The World Burns-New Band To Burn One To 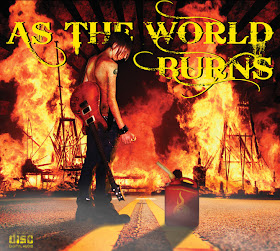 
AS THE WORLD BURNS was formed in early 2005. We are all seasoned musicians. A.T.W.B. has a strong rhythm section and lead guitar and vocals that really set us apart from the others.

We sound like Megadeth had a one night stand with Ozzy and were raised by Steve Vai and David Gilmour. Bands we would fit with, style wise, range from rock like Skid Row- Guns and Roses to Metal such as Avenged Sevenfold, Megadeth ect. Always difficult to label yourself. We sound like the sum of our collective influences which is quite broad and which give us our unique sound.

We play regionally. On the east coast mainly. We frequently open for national acts at The NorVa in Norfolk, Va. (the premiere place to play in our area.) Other venues worth mention are Jaxx in Springfield, Va- Alley Katz in Richmond- Sonar in Baltimore and Lamoure's in N.Y.C. We have acquired a healthy following over the years.

Late spring ’08 we released a 4 song Demo CD, “Let it Rust”, that was been well received. Our full length debut CD was released May 12th, 2011. Currently available at all digital retail outlets. Including iTunes and Amazon.

"As The World Burns is a tremendous band  from Norfolk, VA. The band's unique blend of melody and bombast are intriguing, most notably the fiery guitar work of Rich Clark and gritty southern vocal style of John Ferreira. Plenty of heavy guitar crunch provide the backbone to a sound that lies somewhere between eighties heavy rock to today's heavy metal. Throw up your horns and bang yer fuckin' head to As The World Burns!"